Since the summer of 2016, the Hudson Scholars Program has been pairing ‘cohorts’ of same-grade Sleepy Hollow Middle School students with Mentors from Hackley’s Upper School. The goal of these Mentors isn’t just to help the SHMS Scholars improve academically, but also to serve as role models, leaders, and friends. The close relationships between the Scholars and Mentors are at the core of the Hudson Scholars program as it enters its seventh year.

Potential Scholars, whose qualifications for eligibility are that they receive free or reduced-price lunch and will be hard workers and dedicated students, are nominated by Washington Irving 5th-grade teachers each year. In addition to summer programming, the Scholars can attend tutoring sessions during the school year as well as monthly “reunions” where they participate in academic challenges as well as bonding and team-building activities. While the tutoring sessions as well as many of the reunions are currently being held over Zoom due to Covid-19, the Hudson Scholars’ October reunion took the form of a seasonal outdoor activity: apple picking. 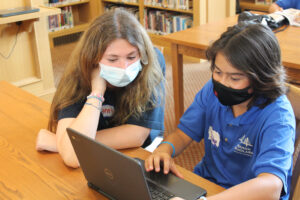 The majority of current Scholars showed up for two hours of uninterrupted fun with their Mentors. In addition to picking apples, they participated in a scavenger hunt and spent time catching up with Mentors that they haven’t been able to see in person.

“We wanted to create a space for Scholars and Mentors to be together, have fun and just be kids,” Hudson Scholars Program Director David Sykes said of the apple picking excursion. “The chance to reunite and destress was as important to the Mentors as it was to the Scholars, as many of the Mentors are in the middle of difficult tests and college applications.”

For the November reunion, Scholars and Mentors met virtually to discuss the theme of ‘gratitude’ for Thanksgiving. After Mentors began by sharing what gratitude means to them, they and the Scholars moved into small breakout rooms for activities such as trivia and ranking traditional Thanksgiving foods in tiers. At the end, Scholars wrote anonymous notes detailing what they thought was the highlight of the reunion.

“I think that the highlight of today’s Hudson Scholar meeting was being able to see everybody again,” read one of the anonymous notes. “It’s been so long and it really made me happy to see all of you. For today I really enjoyed making the origami turkeys! Now I have a little turkey desk decoration! :)”

For the December reunion, Scholars picked up goodie bags at school containing supplies for activities including decorating ornaments and holiday trivia that they completed with their peers and Mentors over Zoom.

The data that the program gathered last summer points toward Scholars who not only feel they have improved academically and personally, but also feel a strong sense of community with their peers and Mentors. 93% of Scholars reported that they are happy to have attended the program, while 100% feel that they are part of the Hudson Scholars community and 89% reported feeling that they’ve learned more about what it means to be a good, upstanding citizen and community member. These survey results show that the Hudson Scholars program has succeeded in its goal of providing a tight-knit, supportive community to help students achieve both academic and personal success, and the hope is that this community will continue to grow as the program heads into its seventh year.