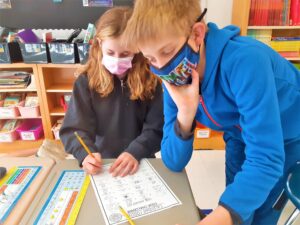 What does the future hold for us? Maybe Todd fifth graders know!

Inspired by their social studies unit on ancient civilizations, students in Kathleen Godleski’s class created secret messages about the future and “carved” them onto playdough to create their very own Mayan calendar artifact.

Working in pairs, students first came up with their own alphabet code with which they wrote a secret message about the future. What might lie ahead? “Dogs will run the world,” “There will be robots and JetPacks,” and “There will be peace in the world.”

“We recently finished learning about ancient civilizations in social studies class,” said Ms. Godleski. “I wanted to incorporate a little STEAM activity. I asked the students to come up with a four or five-word message that they can fit on a piece of playdough, so if it doesn’t fit, they can go back to revise.”

Owen and Sloane were working together, flattening the playdough as much as they could and trying to carve out their entire message onto it using the tip of a paperclip.

“We can’t make the message too big because it wouldn’t fit, but we also can’t make it too small because then it’s too hard to carve,” Owen said. They had clearly designed an easy to use code. “Most of the symbols are pretty easy to copy, though” he added.

What You Should Know about Elon Mask’s Educational Background