Usually, E. coli bacteria is dangerous to humans, but did you know it can be bioengineered to be safe for use in schools?

Seventh graders in Jessica Loprieno’s Briarcliff Middle School science class have been painting with bioengineered E. coli bacteria on petri dishes to create cool designs. The materials in this activity were purchased as a kit designed for students in grades K-12 to learn about how bacteria grow, in a safe manner.

“The objective of the activity was to manipulate and grow bioengineered bacteria that are colorful,” Ms. Loprieno said.

In class, students have been learning about reproduction and that bacteria reproduce much more rapidly in warmer temperature.

Working in groups of four, students began by sketching their designs on a blank stencil cards. They then placed a larger blank petri dish on top of the stencil as their “canvas.” Using yellow inoculation loops, students painted the art they had sketched by dipping the colored bacteria from the small dishes and tracing the image. 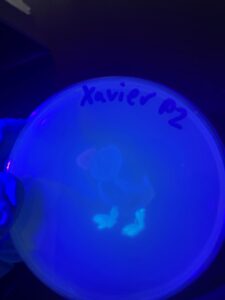 The drawings cannot be seen right away, as the large petri dishes need to be incubated for 24-72 hours and stored at 37 degrees Celsius.

“As the bacteria will bloom and grow, within a day or two students will begin to see their designs,” Ms. Loprieno said. “They drew things like donuts and goldfish, so it will be really nice to see the final result.”