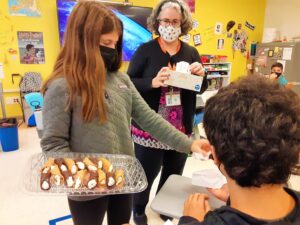 Cannolis, maple taffy, guinea pigs…what do these things all have in common? They are foods eaten in Italy, Canada and Ecuador, respectively. Seventh graders in Nancy Kress’s Culture Enrichment class learned all about foods and other cultural aspects during family heritage presentations.

“This is a new class this year,” said Ms. Kress, who teaches world languages in Briarcliff Middle School. “We wanted to give something to students whose schedules could not accommodate a language class in middle school and it is such a fun class!”

The one-quarter-long enrichment class is not graded and according to Ms. Kress, most if not all seventh and eighth graders will participate in it.

“Students with multiple heritages were allowed to discuss all of the countries their family is from but everyone just picked one,” Ms. Kress said. Students presented information such as the flag, language, currency, music and food from their selected country. They shared photos and some students brought food – for example, cannolis from Italy. (The ingredient list was shared with the students prior to eating.) Some of the countries in the presentation were Taiwan, Ecuador, Canada, Italy and Portugal.

“It is so wonderful to be able to celebrate all of these cultures together,” Ms. Kress said. “The Family Heritage Project means a lot to the students and it is also very interesting.”

Earlier in the year, the class studied folk tales.

“We read folk tales from all over the world, including a Native American story,” Ms. Kress said.

“Students began with reading stories to each other and discussing the main idea and their feelings about the folk tales. They were later divided into groups to sharewhat they had learned from the stories,” Ms. Kress said. “Eventually everyone got to hear them.”

Next up: an international film festival.

“The students will decide from a list and then discuss the movies,” Ms. Kress said. “I am also hoping to give the students a recipe to make either in the class or at home,” she added.

Check Out Our 2022 Sleepy Hollow Tarrytown Chamber of Commerce Section