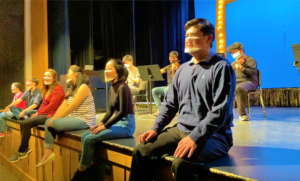 Life during a pandemic changes on a daily basis and sometimes it feels like we are all building a plane mid-flight. No one can relate to this more than Briarcliff High School Theater Director Paul Kite, who has been working with students on their spring musical and helping them figure things out as they went along.

The musical, a “sort of revue,” will feature songs from various Broadway musicals, old and new, alongside scenes in between, and will be available to watch online in mid-May.

“The scenes connected the songs together into the story to create a cohesive night of virtual theater,” Mr. Kite explained.

The process leading up to the idea began back in January and involved both the students and the creative team.

“We started with a series of meetings and we talked about what the students’ experience has been so far in the pandemic,” Mr. Kite said. “I did a lot of interviewing and I recorded the students. I was very interested in their opinions and wanted to know what songs and shows they liked, so I sent out questionnaires as we were trying to coalesce an idea for the show, which is very much based on the students’ taste,” he added. 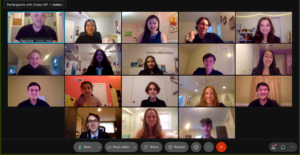 Together, the students and the creative team realized that a revue was their best option.

“The students didn’t want to just have songs, so we added scenes to create it a story and that is how we came up with the concept,” Mr. Kite said. “We decided we wanted our show to be aware of the pandemic so we picked our songs in relation to it, but we still wanted to make sure it was done in the right way. There are some heartfelt moments but nothing heavy or depressing. We call it “pandemic-light” – it is about seeing the bright side of things and how we are able to connect to each other. It is about the positive things that get us through, so it is very positive,” he added.

When it came down to writing the scenes, Mr. Kite did the writing himself, with some help.

“The students all devised ideas for their characters and I did most of the writing, although many of the students wrote for their scenes as well. They did it all: the writing, acting, singing and dancing. The result, I hope, is that it is much more personal to them than previous shows,” he said.

The story is about a group of friends in their post-college year who have a yearly tradition of celebrating one of their birthdays together. Because of the pandemic, they have to try and figure out how to continue this tradition. The show features each person in the group and highlights how he or she is navigating the pandemic.

“This is a completely original story, except for the music. Although I cannot disclose the names of the songs or the musicals that they are from, I will say that they run the gamut, but do tend to lean more towards modern musicals,” Mr. Kite said.

The show, which features 15-20 songs, will put the focus on Briarcliff’s seniors.

“This is an ensemble piece but we did make sure to highlight the seniors,” Mr. Kite said. “The creative team and I had a strong desire to showcase the seniors, first because we have a very strong senior class this year, but also since it is their last show at Briarcliff and it is done not in the way they probably imagined it would be when they first came to the high school.”

The show is almost entirely filmed in the students’ homes, except for the final number, which will be filmed on the Briarcliff stage in the auditorium.

“The students used their own costumes from their closets. We have a musical director, who is coaching the students over Zoom, we have a choreographer, and we have students from Briarcliff who are playing instruments. The tech crew built the scene on the stage in the auditorium,” Mr. Kite said.

Putting together a virtual musical is a multi-step process.

“To assemble a musical remotely you first get a piano track and send it to all the singers and musicians. Everyone sends their versions back to me and I assemble them and send to an editor who is going to put it all together. Then we will send that back to the singers and they will film themselves lip syncing to it,” Mr. Kite explained.

Although it has been a challenge, Mr. Kite is very enthusiastic about the outcome.

“We found our way through the challenges as we navigated them,” he said. “As complicated and as confusing as it has been, the saving grace for me has been the students and the parents who were flexible and talented and understanding. I have been blessed with such a great group this year. I know it is not what the students were expecting but I do think that what we have come up with is something that is actually very, very cool. I am really excited this year!”

“We took the hand that COVID dealt us and turned it into an opportunity to do something entirely original, with no pre-existing standard to compare it to,” she said. “ Despite all the challenges, I am so proud of our cast for adjusting quickly, rolling with the punches and, most importantly, for putting together an incredible final product.”

Performances will be offered on demand at www.briarclifftheaterpresents.com with ticket purchase and password access at the dates and times below. Each time slot requires a separate ticket purchase.

All tickets are $15 per person and can be purchased at www.showtix4u.com up to 1 hour before each show. If you have any questions about tickets, please contact briarcliffticketsales@gmail.com.