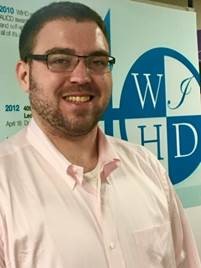 Brendan Klein who works for the Westchester Institute for Human Development to expand community service opportunities for young adults with disabilities has won three distinguished awards for his work in the community.

Brendan, 24, a resident of Pleasantville who himself has developmental disabilities, was named by the United Way’s Emerging Leaders Alliance as one of the winners of its United We Rock Awards, honoring community-minded and philanthropic young professionals and college students. He will receive the award at a ceremony on October 24 at Manhattanville College. Brendan was also recognized by Westfair Communications and will be presented with a Millennial Award on November 21 at the Serafina by the Italian Center in Stamford. For his outstanding work using social media to provide social opportunities for young people with disabilities, Brendan will also be presented with the Self-Advocacy Association of New York State’s Media Innovator Award on October 11.

“Brendan is an outstanding young man who has worked tirelessly to connect young people with disabilities to social opportunities. This is so important for young people who often feel isolated,’’ said Susan Fox, President and CEO of the Westchester Institute of Human Development. “Outside his job, Brendan spends many hours volunteering for community organizations like the Pleasantville Community Garden and using his skills with social media to promote worthy causes. We are all very proud of Brendan, and so happy that all his achievements are being recognized.”

Brendan was hired by WIHD with a grant from the Taft Foundation. His mission is to engage his peers in integrated community service projects and expand inclusive social opportunities for young adults with disabilities in Westchester County. Brendan uses his social media/tech/video skills and personal outreach to help connect young people with disabilities to each other and integrate them into meaningful social activities in a way that is innovative and unique to the special needs community. In addition to his work at WIHD, Brendan is also a passionate self-advocate at both the local and state level, participating as a WIHD Community Advisory Committee member, as an officer in Hear Our Voices group, as a peer facilitator at Youth Power and as a member of Self Advocacy-New York State, or SANYS. Brendan also serves as a self-advocate on the Family Advisory Committee at Life Plan NY, a NYS Care Coordination entity. Brendan will be presenting to his first national audience in November at the AUCD Conference in Washington, DC.

Brendan is very actively engaged in the community, both personally and with his social network. He volunteers at both the Pleasantville Volunteer Ambulance Corps and the Pleasantville Community Garden, where he received the volunteer of the year award in 2017. Brendan was so inspired by the garden work and its mission that he decided to bring its therapeutic benefits to WIHD, spearheading a campaign to revive the garden with the WIHD Child Welfare program.

He is the youngest of four brothers and a lifelong Pleasantville resident as well as a cancer survivor. He is a proud graduate of the PUFSD/Pace University Lab School program and was the recipient of the 2013 Overcoming the Odds award from Student Advocacy in Elmsford, NY.

As one of 67 University Centers of Excellence in Developmental Disabilities, the Westchester Institute for Human Development (WIHD) is dedicated to improving the lives of people with disabilities and vulnerable children through professional education, direct service provision, and innovative research. For more information, go to www.wihd.org.