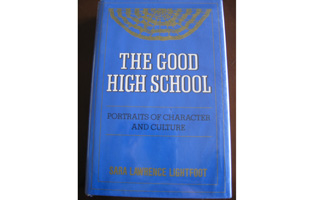 In the early 1980s, Harvard Professor and Sociologist Sara Lawrence-Lightfoot published The Good High School, which helped usher in a new paradigm in public education.

She asked the question,  “What makes a good school?” and then studied different schools with impeccable reputations for excellence, with an eye towards the qualities of leadership that fostered that excellence. “She was really looking at the relationship between styles of leadership and their impact on the culture of the school,” recalls Dr. Robert McCarthy, the former principal of Brookline High School in Massachusetts and one of the subjects of the book. “It generated a lot of publicity in the education circles.”

Inspired by Lawrence-Lightfoot’s book, Pace University School of Education Associate Professor Mary Rose McCarthy (no relation to former Principal McCarthy) is looking to perform a similar study nearly thirty years later. “[Lawrence-Lightfoot] identified aspects of schools that you would want to look at… leadership… the role of teachers, how are teachers regarded… how are kids treated… what’s the curriculum like… the relationship to the community,” says McCarthy. “Those aspects are the guiding principles, topics, questions for [my] study.” McCarthy has a PhD from the University of New York at Buffalo in Foundations of Education, specializing in the History of Education.

As a model for her modern day “Good High School” study, Mary Rose McCarthy has chosen Sleepy Hollow High School. “This is a school that has been identified in the State and nationally as a good school,” she explains. “Certainly compared to other schools in the State with diverse populations this is a really successful school and district.”

In choosing Sleepy Hollow over other high schools, McCarthy considered a number of factors including high test scores, outside recognition, and particularly, the school’s high graduation rates. “The graduation rate at the high school level is extraordinary,” she says. “I think that’s a very telling and important number.” Each year, Sleepy Hollow High School graduates between 94% and 98% of eligible students, with an average of 93% of graduates going on to either a 2-year or 4-year college. These numbers are impressive compared to districts with similar demographics, and have not gone unnoticed. In 2008, RMC Research, with support from the Magellan Foundation, selected Sleepy Hollow High School as one of five New York schools for a statewide study profiling high schools with low dropout rates relative to peer high schools with similar populations and resources. (http://rmcres.com/documents/Magellan.pdf) The following year, the school was designated a Model School for Best Practices by the U.S. Department of Education for dropout prevention and was featured on the government’s “Doing What Works” website.

McCarthy’s research project, which she hopes to turn into a book, will explore how the high school has achieved its results. “We are going to take a look at the history of Sleepy Hollow in the last 10-20 years,” she explains. “Very few histories tell you how a school got to a place like this. I don’t think we know what this takes on a day-to-day basis.”

She’s especially interested in discovering how the district has adapted over time to its growing diversity. “One of the things that makes [the district] different is the fact that it is meant to serve a diverse population,” she says. “So the curriculum meets the needs of kids who are on their way to elite colleges, kids who are on their way to community colleges, and kids who are on their way to jobs. Being able to provide opportunities for kids who have parents with the money to send them to other places, I think, is different. In many ways that benefits everybody. One of the things I want to see is how does that work? Does anybody get short-changed in the process? The numbers tell us nobody is getting short-changed. The numbers tell us that in fact this is beneficial to everybody. Kids whose family background would predict success are as successful here as they would be anywhere else, and kids whose family background wouldn’t predict success are more successful here than they would be in other places.”
She is aware of the irony of beginning her study at the same time as the district is being designated a District In Need of Improvement by No Child Left Behind, but puts the blame for that designation squarely on the shoulders of the politicians who crafted the legislation. “Some of NCLB supporters are not supporters of public education as we know it,” she says. “It’s possible that some of the goals that were set were unrealistic given the amount of support that people wanted to give to schools… There’s a kind of failure built in [to NCLB], so that where we are now was inevitable given the set-up.”

With the approval of district administration, McCarthy will be observing the school several times between now and the end of the 2012, after which she will begin the actual writing process when she goes on sabbatical.  She plans on interviewing a wide range of people for her study, including Principal Conklin, staff and faculty, students, and alumni. “I’m very open to finding out what is here,” she said. “I want to soak it up and find out what people tell me and find out what they think the cause and effect is…it’s exploratory.”

She is not taking this study lightly. As a University Professor, her work will go through an Institutional Review Board based on national standards of ethics, and everyone she speaks with for the purpose of the study will be signing informed consent forms. Any students who are interviewed will need to have their parents sign the informed consent forms as well. Also, the Board of Education will be officially notified of the project, and will have the opportunity to examine McCarthy’s methodology, practices and conclusions.

McCarthy is excited to begin spending time at Sleepy Hollow High School and seeing firsthand how the school has maintained its high graduation rates and high test scores while continually evolving with the changing demographics of the community. “This is a study of ongoing progress towards goals that are shared and rethought and reestablished,” she said. “It’s that process that I’m interested in taking a look at. I think there are very few studies like that.”   ©