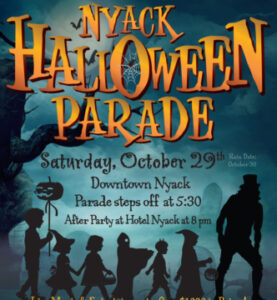 Halloween is quickly creeping up. The count-down to the Nyack parade is in final days. Costume and float contestants — including pets — are putting finishing touches on their scariest, craziest Halloween regalia for the big event.

After a two-year pandemic halt, the famous parade is coming back to Nyack on Saturday, October 29. (Rain date Sunday, October 30.) Festivities begin at 3:00 pm and continue into the evening. Nyack’s Main Street and South Broadway will be closed for the day’s celebrations. The parade will step off promptly at 5:30 pm.

Hosted by the Nyack Chamber of Commerce and the Village of Nyack, the Nyack Halloween parade is the biggest outside New York City, second in magnitude only to the Greenwich Village event ― and just as spectacular on the “wow” meter for color, pageantry and unabashed craziness.

“For people who love the scary fun and pageantry of Halloween, Nyack is the place to be for the best parade, costumes, parties, trick-or-treating and all-out wacky celebrations,” said Roger Cohen, President, Nyack Chamber.

Building on a history of record-breaking crowds, upwards of 10,000 spectators are expected to line the streets of Main and Broadway in Nyack for this fun-filled, family-friendly event, featuring marching bands, festooned fire trucks, phantasmagorical floats and a host of costumed revelers. Great prizes will be awarded to the most creative among the parade’s participants. 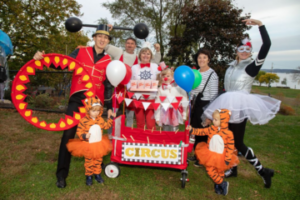 All are welcome to march in the parade and compete for prizes. Marchers and floats will assemble at 3:00 pm for check-in and contest judging in Memorial Park at the corner of Depew and Piermont streets in downtown Nyack. Contest registration (available online at nyackchamber.org) is required for prize eligibility. Registration and judging will continue until 5:00 pm, followed by the parade step-off at 5:30 pm.

In addition to donning their own best Halloween attire, Halloween enthusiasts are invited to dress their pets in their most daring — or darling — costumes and enter Nyack’s first-ever Pet Costume Contest. The contest will be held early on parade day from 12:00 pm – 1:00 pm in Memorial Park.

“We don’t want our scaly, furry, or feathered friends to get spooked by the parade crowd,” said Mark Reed, Nyack Chamber Board member and parade organizer. “We also want these special contestants to get the full attention they deserve, separate from the traditional costume and float categories.”

Judging for pets begins at 12:00 noon in Memorial Park; prizes will be awarded at 1:00 pm. If pets are ‘game’ to participate in the parade itself, pets and their people should return to Memorial Park between 3:00 pm and 5:00 pm to prepare for the parade step-off at 5:30 pm.

Prize contestants – floats, costumes and pets — are encouraged to pre-register online at nyackchamber.org to speed up the parade day process. All contestants should plan to check in at the Chamber desk in Memorial Park for confirmation and photography.

The much-anticipated prize award ceremony for costumes and floats (for humans) will begin immediately after the parade in the main municipal lot in the center of town.

Best Float winners will score cash prizes ranging from $100 to $500. The iconic Best Costume award will include cash, a gift certificate and trophy. In other costume categories, winners will get a ‘piece of Nyack’ — a variety of experiences at Nyack favorites. Highlights include gift certificates, hotel stays, and even local food tours for groups.

Among the fun prizes for kids are gift cards for a free party, free books and free pizza. Pets can win high-end salon treatments (or other pet appropriate services), such as a full-service bath, brush and trim, a creative color dye, or a nail trim and file. Who doesn’t need a little pampering? Entertainment…and post-parade fear-filled fun

Famous Frankie D and the Boyz — perennial favorites at the Nyack celebration — will provide live music all afternoon before, during and after the parade in the municipal/Farmers Market parking lot on Main Street.

Post-parade celebrations will continue into the evening, with the traditional costume madness and live music at Casa del Sol on Main Street and other establishments in the village. 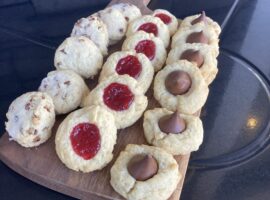