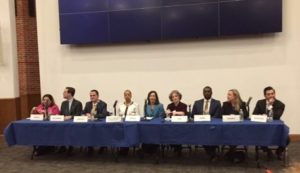 The deep bench of candidates competing for Nita Lowey’s 17th Congressional District seat was on full display at Mercy College in late January. An enthusiastic audience of over 300 attended, the size of the crowd confirming the current appetite for politics both local and national. They listened attentively and made their feelings known as the individuals delivered their pitches and underscored their unique selling points. Boos, laughter, even calls of “liar” punctuated the Q&A sessions.

The moderator, Barrett Seaman, Chair of The Hudson Independent‘s Editorial Board, opened by giving the five women and four men two minutes each to share their strengths and ambitions. State Assemblyman David Buchwald, who is thought of as one of the front-runners and has already amassed endorsements from a wide range of leaders, touted his integrity and long experience in Albany. State Senator David Carlucci emphasized his productivity as a lawmaker, citing some 36 bills signed into law. Asha Castleberry-Hernandez, a professor at George Washington University, forcefully explained her military experience and national security expertise. Evelyn Farkas, who worked in the Obama administration, crisply laid out the five strengths she brought to her candidacy, chief of which are experience, national stature and empathy.

Allison Fine, author of three books, with a background in technology and women’s reproductive rights, vowed to harness new technology for the good. Lawyer and activist Mondaire Jones, another Obama administration alum, stressed that policy is personal and pointed out his refusal of corporate PAC donations. Ex-small-businesswoman, now Westchester County Legislator Catherine Parker underscored her twelve years of experience. Former federal prosecutor and state consumer-protection legislator Adam Schleifer stressed his service at both levels of government. And Catherine Borgia emphasized her long service and current role as Chair of the Budget and Appropriations Committee for Westchester County Board of Legislators.

Opening up a little about their personal lives and influences, Borgia revealed herself to be a single parent, while Parker and Jones were raised by single mothers, Jones watching his parent work multiple jobs while relying on Section 8 housing and food stamps. Farkas, the daughter of Hungarian immigrants, described how she learned English as a child, while Schleifer paid tribute to his grandparents, Holocaust survivors, and his brother who has special needs.

At large forums like these, this kind of detail certainly helps anchor an individual candidate in the voter’s mind, but so do style and delivery. Some of the speakers displayed slickness and a tendency to bloviate that seemed not to go down well with the audience.  Others, once they had delivered their opening pitches and were asked to respond to questions, exposed the limitations of their political experience. Those who emerged most impressively offered range, clarity and the simple – but not necessarily easy – ability to answer the actual question posed.

Inevitably, many candidates declared commitments to the same issues. The green new deal specifically and the environment generally drew many declarations of intent. Health care, taxation, and student debt cropped up often. But there were policy differences as well. Schleifer, son of the CEO of Regeneron, declared his support for a carbon tax. Jones, however, declared this policy was nowhere near enough to tackle the environmental crisis.

In a separate exchange, Castleberry-Hernandez pointedly referred to the need for “personal courage” in politics. This may have been a comment on Carlucci’s apparent dodging of questions he was asked on the issues of zoning, and his previous support for the IDC (Independent Democratic Conference), both of which resulted in audience objections. His IDC support was raised again when Parker drew attention to Carlucci’s voting record, particularly in the area of women’s reproductive rights.

But on the whole this was a good-natured forum which offered voters the chance to put names, ideas and passions to faces. The overriding impression was of a wealth of good options to choose from. With months to go before the election, and many more such opportunities ahead, Westchester citizens are going to have to make some tough choices. Meanwhile, two days after the event, Senator Elizabeth Warren declared her endorsement of Mondaire Jones.