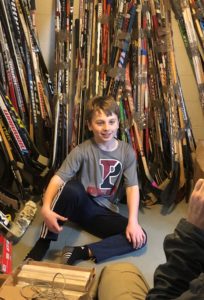 Brian Jaeger, a local student in Hastings-on-Hudson, has raised over $1600 by collecting used hockey sticks he is donating to local youth organizations.

Brian is an avid ice hockey player. His parents are supporting this effort by donating $5 for each hockey stick he collects. An anonymous donor has agreed to match his parents contributions. The money collected will be donated to the ‘Marla’s Fund’ at the Edgemont School Foundation. Brian’s aunt, Marla, was a beloved kindergarten and first grade teacher at the Greenville Elementary School for over twenty years. Three years ago she passed away at age 45 from kidney cancer. The Edgemont community erected a statue and plaque in her honor which sits right outside her Greenville school classroom window. Marla and her sister Jacqueline attended the Edgemont schools. The fund was set up to enhance the teaching of early childhood literacy, Marla’s educational passion.

Brian and his “Auntie Marla” had a special relationship. On the occasion of his Bar Mitzvah this past September at Temple Beth Shalom in Hastings, Brian chose to honor the memory of his Auntie Marla by creating the charity he named “Stick Up To Cancer”.

To date, Brian has collected over 350 hockey sticks from all around the Greenburgh area as well as throughout the County and from the metropolitan area. Ice hockey rinks and sporting goods stores are supporting this effort.

Brian recently spoke before the Greenburgh Town Board about his Bar Mitzvah “mitzvah” project. His presentation to the Town Board is posted on  You Tube (https://youtu.be/pVsFrShVPIk).

Those wishing to donate  hockey sticks can contact Brian at stickuptocancer@gmail.com. Arrangements will be made to pick up the sticks. Those wishing to make a matching cash donation for one or more sticks can do so by sending a check payable to the “Marla Fund – Edgemont School Foundation” to: