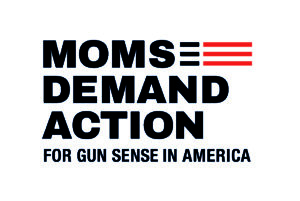 Moms Demand Action for Gun Sense in America along with State, County, and local Hudson Valley lawmakers gathered in White Plains on Thursday to sign a panel from the original 1969 Woodstock stage. The signing is in support of federal common-sense gun reforms, including background checks on all gun sales and red flag laws.

Senator David Carlucci said: “We sent the message to Washington that Hudson Valley lawmakers at every level of government will not tolerate the carnage of another mass shooting or gun violence in our country. By signing the Woodstock stage panel, we stood in unity and in support of a country focused on its best days ahead, without deadly gun violence. I thank advocates, Moms Demand Action and Peace of Stage for their tremendous activism for safer communities.” 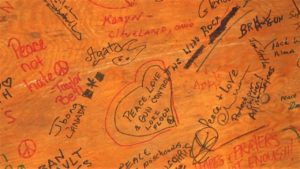 Steve Gold acquired the original stage and began using it for social change after collecting hundreds of signatures in support of common-sense gun laws at Woodstock’s 50th Anniversary events. Gold, a resident of New City, then reached out to Sen. Carlucci to garner more signatures. Carlucci prominently displayed the panel in his New City office so residents could show their support.

Steve Gold, Co-founder of Peace of Stage said: “Woodstock was all about music, peace and a huge instant community of people caring for each other. The original stage panel symbolizes that unity and social activism. Hundreds have already been inspired and signed the stage panel and we hope many more will sign it and our online petition and join us in demanding common-sense gun reform.”

Volunteers with Moms Demand Action for Gun Sense in America from Westchester and Rockland Counties showed their support by signing the panel, which will be delivered by Gold to Senate Majority Leader Mitch McConnell in Washington, D.C.

Naomi Marrow, Westchester Local Group Legislative Lead, Moms Demand Action for Gun Sense in America said: “We are in a rolling national nightmare of escalating gun violence and Moms Demand Action is pressing the Senate to immediately pass background checks on all gun purchases and a comprehensive Red Flag law.  We should not live in fear of gun violence and must raise our voices to enact sensible laws to protect Americans now.” Senate Majority Leader Andrea Stewart-Cousins said: “I am proud to join with gun safety advocates and my colleagues from state and local government to take a stand against gun violence. Our nation has a gun violence epidemic, and nothing is being done in Washington to address this crisis. My Senate Democratic Majority took historic steps this year to combat gun violence and better protect New York communities. Now it is time for Washington to follow New York’s lead and pass common-sense policies like effective background checks, extreme risk protection orders, and other gun safety measures. New York will continue to lead the nation in the fight against gun violence, and I hope Washington leaders finally listen and act.”

Westchester County Executive George Latimer said: “Woodstock inspired thousands to try and create change, and I am happy to stand together with my colleagues in government in support of common-sense gun legislation. Far too many lives have been lost due to senseless gun violence, and it is time we all band together to demand action.”

Congresswoman Nita Lowey sent a representative on her behalf, while United States Democratic Leader Charles E. Schumer said in a statement: “Moms Demand Action has been a tireless advocate, strong supporter and true ally in the fight for common-sense gun reforms, especially right here in Westchester. We can’t afford a bill that is simply aimed at pleasing the NRA, not to get the job done; we need real results. It is abhorrent that despite an endless string of shootings, hundreds of lives lost and the overwhelming cries by the American people throughout the country pleading for Congress to act on gun violence and end these senseless tragedies, that we have to stand here and keep the pressure on. Nonetheless, please be rest assured that I stand with you in this fight. Whether in spirit at today’s rally or on the Senate floor, I will continue to vociferously fight for meaningful and commonsense reforms, like fixing our broken background check law.”

In Congress, Senate Republicans have failed to support a bill expanding background checks, despite it passing with bipartisan support in the House, following the El Paso and Dayton shootings, which left 31 people dead.