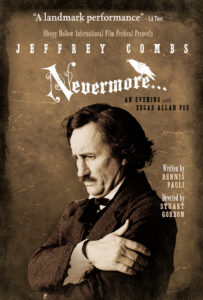 For over 10 years, actor Jeffrey Combs has been performing a one-man show about the life of author Edgar Allen Poe. Although he’s performed the show, called Nevermore, all around the country, he’s never appeared in Westchester. In fact, he’s only performed the show once in New York. That will change when Combs performs at the Tarrytown Music Hall as part of the inaugural Sleepy Hollow International Film Festival (SHIFF).

Why Poe at a festival rooted in Washington Irving’s Legend of Sleepy Hollow? “Poe was a contemporary of Irving although I don’t think they ever met,” said Combs. Combs, as Poe, refers to Irving in his show. “I take dark delight in pointing out that Poe doesn’t have very nice things to say about Irving.” Specifically about Irving’s penchant for always having a moral to his stories while Poe was often criticized for being without morals.

“Poe persevered through an insurmountable amount of disappointment, heartbreak and tragedy. He was only 40 when he died. And he died penniless,” said Combs. Now, of course, he is viewed much differently than when he was alive. “Poe was truly one of America’s great writers,” continued Combs. “I’m honored every time I step on stage and recite his beautiful words.”

Jeffrey Comb’s Nevermore will be performed at the Tarrytown Music Hall during the SHIFF weekend (Oct 11-13) with the exact date and time still to be determined. Check out www.sleepyhollowfilmfest.com and the Music Hall website for ticket information when it becomes available.