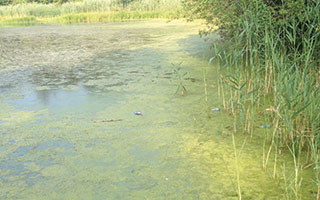 The scientific name for this process is eutrophication, which is what happens when an ecosystem – in this case the once-clean Tarrytown Lakes – is forced to deal with an unexpected influx of nutrients such as phosphates or
nitrates. This influx can be a sudden change or a slow buildup over the course of decades, but the end result is the same.

“Eutrophication… is basically the dying of a lake,” says Mark Fry, current member and former Chairperson of the Tarrytown Lakes Committee. He has been involved with the lakes since 1986, and says that in addition to the algae bloom, two species of aquatic weeds – coontail (ceratophyllum demersum) and eurasian milfoil (myriophyllum spicatum) – have taken up residence. “These particular invasive aquatic weeds, given the proper conditions, will undergo extraordinary growth and then that uses up all of the oxygen… and that chokes off all the life [in the lake]. Kills the fish.”

Fry also points out that there are multiple forms of algae present in the lakes. Besides the large amount of algae currently floating atop much of the upper lake, the real danger is from the blue-green algae which lives in the water. “It’s not great for waterfowl,” he says. “Also, if a dog were to drink from the lake at the wrong time in the wrong spot, [the dog] could get very sick.”

Unfortunately, the prevalence and pervasiveness of the blue-green algae continues to increase as more and more unwanted nutrients flow into the water. “It’s [from] water runoff which includes fertilizers and things like that. Stormwater runoff,” says Blau. “Water runs off of people’s yards. If they use fertilizers, ultimately some of that ends up in the lake and that just feeds the algae and creates the algae bloom.”

“90% of the rain hitting a grass lawn on a slope will run off,” agrees Fry. “And what runs off with it? Fertilizer.”

The Village has been aware of the Tarrytown Lakes issue for some time. A few years back, they were put in touch with Lake Savers, a Michigan company specializing in revitalizing lakes using natural means. “Lake Savers came up with a concept where we use certain chemicals and aerators in the lake to address the algae blooms,” says Blau.

“One reason that lakes go bad is because of the nutrients that have built up in the lake bed itself, the compost pile at the bottom of the lake,” says John Tucci, CEO of Lake Savers LLC. “That’s what the aeration system and the biological augmentation [which they implemented in 2010] is designed to remediate. It can also handle a pretty decent load of nutrients from the watershed each year.”

The aeration system (the source of the mysterious bubbles which dot the upper lake), combined with the biological augmentation, which are natural, non-toxic additives that quickly consume the elements on the bottom of the lake, worked quite well during the summers of 2010 and 2011. For a modest cost of $11,000 a year, the lakes were turning a corner. But that stopped in 2012.

“We have the data that shows that [the lakes] are just getting overwhelmed with new inputs from the upland area above the reservoir,” says Tucci. “We have the phosphorus and nitrogen data that confirms that; we’ve taken
samples during rain events, we’ve observed the plume that comes into the lake. We’ve presented the case to the Village; they’ve understood it, and we’re now working on developing a plan for fixing it.”

But before any plan to save the lakes can be implemented, the bleeding needs to be stopped. “The last thing to do would be to go in and dredge out the 12-18 inches of luscious mud that’s at the bottom of that lake,” says current Tarrytown Lakes Committee Chairperson Cathy Ruhland. “But it’s a waste of money to do that until you’ve addressed every single polluted water flow that goes in there.”

[blockquote class=blue]As a Village we haven’t allocated the large number of funds that are required to repair a situation like this.” [/blockquote]

One ongoing source of pollution is the residential area just south of the lakes known as the Crest. “[Some of the most polluted water] is flowing down Irving Avenue and Sunnyside Avenue – the Crest area,” says Ruhland “That’s a very large, populated area. The stop-gap measure would be to get every family that’s draining into the lake aware that they need to cut the minerals that they put on their lawns and their gardens and they need to watch what’s flowing off of their property. That’s what could be done. Nothing is happening right now.”

“Every time it rains, the new load [of unwelcome nutrients] coming into the reservoir is overwhelming,” says Tucci. Lake Savers measured nutrient levels in the Tarrytown Lakes as very high, with such high levels of phosphorus and nitrogen, that strains of algae are growing that are usually only found in sewage. However, “There’s no record or evidence that there’s any kind of sewage leak upstream of this reservoir,” he adds quickly.

Not all of the blame can be laid at the feet of the Crest. “In the Crest, there’s no more fertilizer now than there was in 1975, 2005, or last year,” says Fry. “What’s happened recently is the 48 acres of development in the Toll Brothers project known as Westchester Estates in Wilson Park. They have failed to maintain their sedimentation and erosion control during construction.” 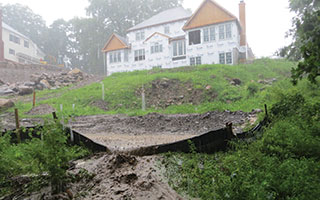 “The stormwater needs to be appropriately flowing – it can’t go directly into the lake,” says Ruhland. “The Planning Board knew this ten years ago, fifteen years ago. That’s why they said any developer buying the Wilson Park property has got to address the convent property next door. That’s what the sub-committee approval actually requires. They require the Toll Brothers to go onto the convent property and pipe the water that comes off of all those driveways up there into a system that cleans out nutrients. So Toll Brothers is on the hook to do that work. They don’t want to do that work. When the Toll Brothers did their construction work along the soccer field they really did a terrible job of containing the muck, and there was this enormous amount of muck that went flying into the lake.”

“All you have to do is cover up your soil pile with tarp,” says Fry. “You’ve got to have hay bales and silt fencing. There are plenty of easy ways to prevent damage to lakes during construction. Everybody knows the rules; certainly the Toll Brothers know the rules, but the degree to which they don’t follow the rules has been the subject of an extraordinary consent order with the United States Environmental Protection Agency.”

In 2012, the EPA announced that Toll Brothers were paying a $741,000 civil penalty to resolve Clean Water Act violations at 370 sites in 23 states, including 18 sites in New York. One of those sites was the Wilson Park project in Tarrytown. They were found to have failed to comply with conditions of permits “resulting in the discharge of pollutants in stormwater from construction sites… Permit violations include the failure to stabilize disturbed soil and properly install and/or maintain stormwater controls such as silt fences, swales, sediment basins, sediment traps, storm drain inlet protection, and construction entrances and exits.”

“Toll Brothers has exacerbated a problem that has been going on for a long time,” agrees Fry.

No matter where the pollution is coming from, the question is what can be done to repair the lakes. After realizing that the aeration system and biological augmentation were “not cutting it,” Lake Savers went back to the drawing board and came up with a new proposal. “They came up with a concept whereby we would try to contain that nutrient load in a small area of the lake and essentially – as opposed to treating the entire lake with the chemicals – treat this very concentrated area of the lake with these chemicals,” says Blau.

Lake Savers estimated the plan, which would consist of cordoning off a 2-acre section of the lake and turning it into a filtration system for the rest of the 2 lakes, would cost close to $50,000.  The Village Board has tentatively approved the plan, but first they have reached out for third party confirmation that Lake Saver’s proposal would work. “It’s not that the Board doesn’t want to do this, it’s that the Board wants to know that they’re spending the taxpayers’ money wisely,” says Blau. “If this new concept doesn’t work, then we’re going to have to look at alternatives for addressing these issues in the lake.”

One possible alternative may come from Lake Savers themselves, who, since the time they proposed their initial plan, have come up with a second plan. “We think if we can reduce the input at the source, we will then see a rapid improvement,” says Tucci. To that end, Lake Savers is proposing to install nutrient filters in the creek which dumps directly into the lake, to filter phosphorus and nitrogen out of the water through natural means, as well as erect barriers upland of the lake to keep sediment back.

“We would literally just use the existing creek bed itself as our containment for the filtration material and try and work with nature to absorb enough of the water flow during rain events to drop the sediment out and filter enough of the nutrients out to allow the filtration system and the program in the lake itself to finally do what it was intended to do,” Tucci explains. “The public looking at the lake won’t see anything different. The other benefit of the
second approach, which we’re probably going to recommend, is that it will be about half the cost of the first option.”

And make no mistake, cost is a factor. With Village budgets squeezed as tight as they are, it isn’t easy to find an extra twenty-five or fifty thousand dollars in the budget for what is, at the end of the day, a recreational area. “At this point, it’s a visual, aesthetic problem,” says Blau. “It isn’t anything else because the lakes are not a drinking source. They haven’t been a water supply since the early 1990s.”

“As a Village we haven’t allocated the large number of funds that are required to repair a situation like this,” says Ruhland. “If the Village would do some of the work that’s required to maintain the area around the lakes, that would go a long way to correcting some of the problem.”

“The big picture is that there’s a lot of stuff fertilizing that upper lake,” she warns. “Until you stop fertilizing the upper lake the algae bloom is going to get bigger and bigger and bigger. That means that if the Villagers step in and say ‘Listen, the lakes are a trademark of this Village, they’re a part of this Village that’s extremely important,’ I believe the Village government would make the decision to do what is necessary to get the funds.”