The film screening is part of the lead-up to the Teatown Hudson River EagleFest. 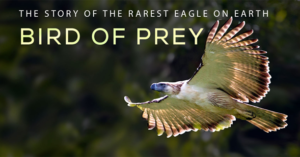 Teatown has teamed up with the Ossining Public Library for a free screening of the Cornell Lab of Ornithology’s new documentary, Bird of Prey. The film will be shown at the Ossining Public Library on Saturday, January 11 at 2pm. RSVP is required, reserve your free tickets now at https://www.teatown.org/events/bird-of-prey/.  The film screening is part of the lead-up to the 16th annual Teatown Hudson River EagleFest on February 8 from 9am-4pm at Croton Point Park. Discounted pre-sale tickets are now available at www.teatown.org/eaglefest.

With fewer than 800 left in the wild, the great Philippine eagle is the rarest eagle on the planet. The Bird of Prey film journeys deep into the vanishing world of the Philippine eagle and reveals an inspiring group of people who are determined to save the critically endangered species. The film follows wildlife cinematographer Neil Rettig’s return to the Philippines 36 years after he and his crew captured the first-ever recorded images of the eagle in the wild. Decades later, at the age of 64, Neil returns to the Philippine jungle on a grueling expedition to find the reclusive raptor and once again film a pair of eagles as they attempt to raise a newborn chick.

At the conclusion of the film, Teatown educators will showcase one of Teatown’s non-releasable brids of prey.

“We’re thrilled to be partnering on this film screening with the Ossining Public Library,” said Kevin Carter, Teatown’s Executive Director. “This film is truly inspirational and showcases the power of both individuals and community in protecting critical species like the great Philippine eagle.”

On February 8, thousands will descend upon the Park on for the 16th annual EagleFest, an event that celebrates the conservation success story that is the bald eagle’s return to the Hudson River Valley after once being on the brink of regional extinction. The celebration will include live bird-of-prey shows, educators with viewing scopes observing wild eagles, children’s activities, food trucks, and 25+ environmental organizations — all in heated tents! For discounted pre-sale tickets, bus tours, and more information, visit teatown.org/eaglefest.