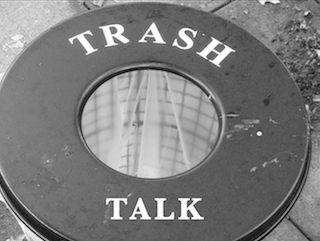 A flyer arrives in the mailbox and a flashing automated message appears on the answering machine. Both advise that starting in the middle of October a “pilot program” that mysteriously began on December 3, 2015 has been “extremely viable and should be expanded throughout the Village.” Wow! Lucky residents will all be included, and not just a select few.

We’re talking trash, garbage, the food of landfills, raccoons, rats, birds and other scavengers looking for an odoriferous treat. Well, the wisdom in Tarrytown at the governmental level is that more trash is a good thing. More trash in bigger barrels and more barrels to boot. 95-gallon barrels, 65-gallon barrels. 2035 barrels to be exact, at a taxpayer cost of $118,768, have been purchased by the Village of Tarrytown. Wait, there’s more. If a homeowner or property owner needs additional barrels because garbage can sure pile up with a once-a-week pickup, then that lucky taxpayer can buy an additional barrel for $3 a week. $3 x 52 weeks is a drop in the barrel, and who could complain at paying $156 in advance for a service they were already paying for in Village taxes. “Yay” for duplication of effort on behalf of the taxman, Mayor and Board of  Trustees.

Now, you can’t always believe everything you read, as is often said. The Village flyer is no exception. In their flyer, the carefully crafted sentence reads, “There will be no need for Village employees to lift and empty heavy garbage cans. This will reduce the amount of lifting-related injuries suffered each year by the Village staff.”  Hmmm, sounds plausible. We asked Village Administrator Mike Blau how many lifting-related injuries had been reported from the beginning of 2015 through October 2016?  He responded by saying he has requested that information. While we wait, let’s talk about this successful “pilot program” of once-a-week garbage collection. Again, we asked the Village Administrator how our elected officials determined a successful “pilot program.” Was there a survey sent out, or were there any public meetings with comments from garbage producers village-wide? No, in each case. “There just weren’t any complaints, or at the very least, a lack of them.” Okay, let’s not be cynical about government and agree that in this case the Village knows best. But do they?  There’s another component being sold in the bulletin. Village employees will be freed up to perform additional work for the Village. So, when not out collecting garbage, where will they go and what new projects will grow? We await the next flyer.

Accordingly, the Village of Tarrytown has cut garbage pickup by 50% as a “cost avoidance issue.”  They report the number of staff in the Department of Public Works in decline. Summer help programs for youth have all been cleaned up and swept away. Both have led to what the Village states as “certain work not completed in a timely manner.” Their hope is that when our garbage remains in barrels for one week that a plethora of additional work will be conducted by DPW staff originally destined for your street twice a week.

We shall see … and we shall definitely see 95-gallon barrels dotting our streets in homogenous rows waiting to be picked up by mechanical arms and gently deposited empty upon those same streets. Who needs twice-a-week pickup of garbage, and what in heaven’s name do our neighboring villages see in such an unnecessary public service?