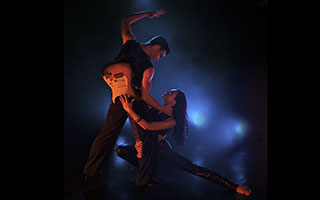 The Tarrytown Music Hall, in association with Music Without Borders, is pleased to present an innovative contemporary dance and rock n’ roll production, They Called it Rock, on Friday, February 14th at 8pm. Tickets are $25-$45 and can be purchased online at www.tarrytownmusichall.org or 1-877-840-0457. The Music Hall continues to produce and present word–renowned artists, serving the communities of Westchester County and the greater Hudson -Valley region.

They Called It Rock is Legendary Music in Motion with songs from iconic artists including Led Zeppelin, Jimi Hendrix, The Who, The Eagles, David Bowie, Elton John and more! A magical pairing of dance and rock n’ roll featuring 8 gifted dancers in a unique fusion of jazz, latin ballroom, salsa, and contemporary dance, set against a blazing backdrop of high definition video imagery. They Called It Rock is a fantasy exploring the serious assertion that rock music — to the youth of repressed societies — had the powerful ability to cut through the ideological barbed wire of government policies, therein becoming a metaphor for freedom, a catalyst for change, and a road map of possibilities for how good life could be.

Classic Rock visualized live on stage like it has never been seen before!

About the Music Hall
The 843-seat Music Hall is owned and operated by The Friends of the Mozartina Musical Arts Conservatory, Inc, a 501(c)(3) nonprofit, educational, and cultural organization established in 1979 and managed by a volunteer Board of Directors. The Music Hall is one of the busiest theaters in the region, offering the best in music, theater, dance, and film, and is a cultural destination, attracting well over 80,000 people including 30,000 children on an annual basis from all over the tri-state area.