This is a story about a bridge. Not just any bridge. A new bridge. Not repaired, rebuilt or refurbished, but new. Brand new. A rare thing in the 21st century.

A colossal, soaring, majestic bridge. An iconic bridge. The largest bridge in New York State spanning one of the widest crossings on the Hudson River. Officially dubbed The Governor Mario M. Cuomo Bridge, living on the web as the New NY Bridge Project, www.newnybridge.com, still referred to by many as, simply, the new bridge, or the new bridge replacing the Tappan Zee.

Of course, this story can never be just about a bridge.

It is about Anika who leaves Stony Point every morning at 7:30 and checks the traffic on her phone before driving over the bridge to make sure she arrives early at her office in White Plains. About Marvin, who takes the family and the Scotch terrier over the bridge once a month on Saturday mornings from his house in Ossining to visit his 86-year-old father waiting to greet them at an assisted living facility in Haverstraw. About Trisha who breathes deeply as she leaves her townhouse in Irvington and readies to cross the bridge to a theatre company in Nyack where she will audition for a feature role in a musical. And still, this is a story about a bridge – one of the nation’s, even the world’s, best-known and most-traveled bridges, a bridge that connects two counties –  Westchester and Rockland – and, moreover, serves as a vital link for the Northeast, its people, its commerce – and far beyond.

The bridge, still under construction, is owned by the New York State Thruway Authority and is being built by a consortium called Tappan Zee Constructors (TZC) comprised of some of the nation’s most respected design, construction and engineering firms.

Because this story is about a megaproject it must also be about numbers. Huge numbers.

140,000 – the number of vehicles that cross the bridge daily. Multiply that by 365 and you get over 50 million vehicles annually.

$3.9 Billion. US dollars. That’s the cost of the bridge – and it has, remarkably, stayed on budget and on schedule.

7,000 people who have worked on the project to date – on or off site – logging over 9 million work hours. The project is on track to meet the Disadvantaged Business Enterprise (DBE) goal of $314 million, 10 percent of the contract with TZC.

3.1 – the length, in miles, of the bridge, and eight 419-foot towers – 100 feet higher than those on the TZ bridge –  each said to be “shaped like a giant harp” suspended by 192 stay cables made up of nearly 700 miles of steel strands which would stretch 14 miles if laid end to end.

And here’s a critical number: 100 – the years the Thruway Authority projects the new bridge to last before it will need any major maintenance. A century. A far better projection than the one made when the Tappan Zee first opened to traffic in 1955. Built just after the end of the Korean War, under a struggling economy, the TZ depended on a tight budget that anticipated its endurance to be around 50 years. 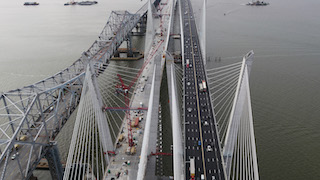 In 1999, discussions began as part of a 30-mile multi-modal improvement project along I-87 to repair or replace the bridge that was clearly deteriorating. The discussions alone cost $88 million: 430 meetings; 150 concepts considered. Meanwhile, hundreds of millions of dollars continued to pour out to maintain the TZ bridge. Ultimately, it was decided that the cost of maintaining the existing bridge would have rivaled the cost of a new bridge and failed to improve traffic conditions. And so, in 2011, the decision to demolish the old bridge and build a new one was finalized.

The construction has involved, and continues to include, many firsts, a few lasts and more to come. In October 2013, the FIRST foundational steel piles were driven into the Hudson River. In November 2015, the FIRST deck panel was installed. In July 2016, the FIRST stay cable was installed on the westbound span.

In August 2017, Governor Andrew Cuomo became the FIRST person to drive over the first span (from August 24 through October 6 the new span carried westbound traffic and the original TZ bridge was still used for eastbound vehicles). He piloted a yellow 1955 Corvette accompanied by Sleepy Hollow’s own Armando “Chick” Galella, a Bronze Star recipient and Pearl Harbor survivor who was part of the procession that first crossed the Tappan Zee Bridge 62 years ago.

“The new Mario M. Cuomo Bridge is much more than a magnificent, cutting-edge structure; it is a symbol for this State and this Nation. The opening of this new span shows the world that we have our energy and our boldness back, that we will continue to accomplish great things, and that we are building bigger and better than we have in decades . . . Excelsior reminds us that the motto of this State says reach even higher, and we’re not only building a new bridge with this in mind –  we are building a new State and a stronger economy.”

On October 6, 2017, the LAST car – a 1929 vintage Model A Ford Phaeton – drove over the Tappan Zee – to much less fanfare – and the old bridge was officially retired.

All traffic is now temporarily shifted onto the first new span with four lanes in each direction. This will allow TZC to demolish the old bridge’s landings and finish the new bridge’s second span.

The new bridge will carry eight lanes – four each on the 96-foot wide north/westbound and 87-foot wide south/eastbound spans, as well as shoulders – breakdown/emergency lanes. There will be a bus lane, and enough space for a commuter rail line which could be built sometime in the future between the two spans. The westbound span will have a 12-foot-wide shared bicycle and pedestrian path and six scenic overlooks allowing viewers to pause and take in the Hudson Valley’s beauty.

The second span is scheduled to open late summer/early fall of this year.

The TZC has managed to stay on schedule and budget by implementing a variety of innovative measures. The consortium is using modular construction techniques to fabricate large sections of the bridge’s foundations, roadway and superstructure off-site at various facilities located everywhere from the Port of Coeymans in upstate New York to Williamsport, Pennsylvania. The bridge elements are shipped by barges to the site – meaning that there are periods in the winter when all have to wait patiently for the river to thaw – and installed by “I Lift NY” –  an enormous crane with a 328-foot arm capable of raising up to 1900 tons, a weight equal to, roughly, 12 Statues of Liberty.

This powerful crane has made it possible to shorten construction time by months and reduce project costs in the hundreds of millions.

A few more innovations of note include: TZC’s mobile concrete batch plants that supply most of the concrete directly on the river; self-climbing jump forms that create the main span towers; protective bubble curtains able to absorb energy produced during pile driving; synchronized jacks that lower football-field-length foundations into the Hudson. 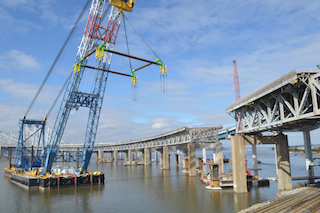 What is happening/will happen to the old bridge which now stands beside the new one, an almost spectral vision – silent, unlit at night, yet clearly visible next to its shiny new descendant? Dismantling (a gentler term than demolition – and, in some instances, more accurate) operations began at the Rockland and Westchester landings in October 2017. Work above water involves cutting and dividing steel and concrete into sections which are then lifted by floating cranes (including the super crane), placed on barges and shipped to various sites.

To minimize disturbance to residents and any potentially adverse impact to the environment, TZC has erected temporary barriers for noise abatement. The consortium uses means to contain debris and monitors air, water, noise (ambient and underwater) quality and vibrations.

Every effort is being made to repurpose and recycle steel trusses and concrete materials. Nine local municipalities including Orange, Essex and Allegany Counties and the NYS Department of Transportation have requested 135 TZ bridge road deck panels for their infrastructure needs which will be delivered by barge. Each panel is approximately 13 feet wide by 50 feet long, and weighs roughly 80,000 pounds; the savings from the recycling is estimated to total close to $3 million.

And so, just as “old soldiers never die, they just fade away,” so does the old bridge valiantly refuse to die, at least portions of it. For those of us prone to nostalgia, who are also environmentally conscious, it is encouraging to know that some parts of the TZ will live on indefinitely, far after its now familiar silhouette has long faded away.