Eric Orner was working as a cartoonist for an alternative Boston weekly in early 1989 when he first met Barney Frank at a function in the city’s South End.

The Democratic congressman remarked that he liked Orner’s recent cartoon lambasting the city’s archbishop for his stance on AIDS.

He worked for Frank during some of the pivotal days of the liberal congressman’s three-decade career, including the Great Recession, when Orner came to Washington after losing his job as a Disney cartoonist.

The leap from cartoonist to congressional aide was a natural one for Orner, who grew up in a “Democratic Machine family” in Chicago, went to law school, and knew the ins-and-outs of politics and government.

Orner, who now lives in Tarrytown, fused his talents in the recently published graphic novel, Smahtguy: The Life and Times of Barney Frank, an irreverent, moving biography of the iconic lawmaker who became one of the first openly gay members of Congress. 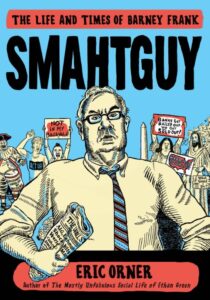 Smahtguy dramatizes Frank’s New Jersey boyhood, his years at Harvard, his introduction to politics as a Boston mayoral aide, and his rise to national prominence as a Wall Street reformer and a gay and civil rights advocate — while wrestling with his own sexual identity until finally coming out in 1987.

Witty, peppered with profanity and delivered in its characters’ Bayonne and Beantown accents, the 220-page illustrated volume takes readers on a tour inside the labyrinth of Beltway politics, skewering its denizens along the way. Orner doesn’t shy away from laying out the congressman’s flaws, but his respect and affection for his subject are clear.

While carving out a career as a cartoonist, Orner turned to law, politics, and government to make ends meet when art didn’t pay the bills.

His time in Washington put him in “a pretty great front row seat to hear some of the stories in this book,” Orner wrote in an email. Some of the best political stories, he said, “aren’t really about the nuts and bolts of politics at all. They’re about the whole spectrum of human interaction: Friendship and Treachery. Violence and Love. Loyalty and Envy.”

Despite its unauthorized, “warts and all portrayal,” Orner said Franks liked the book and appeared with him at a recent book signing in Cambridge, Mass. The former congressman, now 82, published his own memoir, Frank: A Life in Politics From the Great Society to Same-Sex Marriage, in 2015.

Orner moved to Tarrytown last year with his partner, Blake Maher, the CEO of Serious Fun, a nonprofit operating summer camps for children with serious illnesses.

“We loved it instantly — the village atmosphere that it offers — people greeting you on the street, standing outside the Sweet Shop or the Set Back Inn,” he said. “We love the Old Croton Aqueduct trail, the Dutch Reformed Church’s concerts, and the wonderful Transom Bookshop that’s opened.”

Orner previously penned The Mostly Unfabulous Social Life of Ethan Green, billed as one of the country’s first and longest-running gay comic strips. His comic strips and illustrations have appeared in The Washington Post, Boston Globe, San Francisco Chronicle, and The New Republic.

Smahtguy: The Life and Times of Barney Frank is available through Macmillan Publishers (us.macmillan.com/books/9781250191588/smahtguy); Amazon and local booksellers.