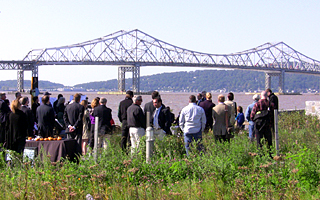 Officials from the Village of Tarrytown, Westchester County, Scenic Hudson and developer National RE/sources were joined by other project supporters in a ribbon cutting today for the new Scenic Hudson RiverWalk Park at Tarrytown.

Also joining the festivities was Kathryn Wasserman Davis—a 104-year-old philanthropist from Westchester County who donated $1 million to the project and who still kayaks on the Hudson. Once a site marked by heavy industry, the park now provides new access to the river and open space against the dramatic backdrop of the Hudson, Tappan Zee Bridge and Manhattan skyline.

The new park stretches along 3,200 feet (or 0.6 mile) of the village’s Hudson riverfront and links to the village’s Pierson Park and the 25-acre brownfield that is being redeveloped by National RE/sources as a 238-unit residential community called Hudson Harbor (formerly known as Ferry Landings). The site is adjacent to a Metro-North railroad station, making it convenient to visitors from Westchester and beyond. To make way for the park, the village orchestrated—with support from the county, Scenic Hudson and National RE/sources—the relocation of an asphalt plant on the site so that public river access could be opened for the first time in 80 years. The site was acquired and remediated by National RE/sources, while the shoreline was stabilized by the Village of Tarrytown with various grants from federal agencies. Scenic Hudson paid for consultants who developed the park’s conceptual design, shaped by input from several public meetings.

County’s RiverWalk ties together park’s unique features
The park comprises an important segment of the Westchester County RiverWalk, which is planned ultimately to connect all riverfront towns along the Hudson from Yonkers to Peekskill with waterfront walkways, bike paths and parks. Scenic Hudson RiverWalk Park at Tarrytown features sitting areas, a prominent overlook and opportunities to reach the water’s edge. There are a series of unique outdoor recreation spaces, including a terraced lawn for sitting, lounging, picnicking or informal games as well as protected areas for reading or for families with small children.

Sitting areas marked by wood-deck platforms have been placed at “view corridors” that connect the park with public streets and make it possible to view the river from those neighboring public streets and National RE/source’s residential development. The park’s edge is delineated by an “eco-corridor” with a series of swales that provide a natural context for park users to enjoy native plants and wildlife. Interpretive signs throughout the park impart the unique history of the site, village and Hudson River Valley.

Throughout Scenic Hudson RiverWalk Park at Tarrytown, pedestrians and cyclists will have chances for social activity, including taking advantage of a series of outdoor “garden rooms” along the esplanade. Grass terraces and lawns in the park’s central location allow for sitting, picnicking and viewing the majesty of the river and its shores as well as the Tappan Zee Bridge and Manhattan skyline.

Village of Tarrytown Mayor Drew Fixell said, “On behalf of the residents of Tarrytown, I want to express our deepest gratitude to all our partners in this wonderful project, and especially to Mrs. Kathryn Davis, who simply cannot be thanked sufficiently for her remarkable personal generosity and vision. This is an extraordinary example of how the private, public and nonprofit sectors can work together to create an invaluable asset that will benefit residents throughout our county, state and nation for many years to come.”

“The county contributed $3.5 million to this park, almost half its cost. This was money well-spent, as it gives us a wonderful park and another segment of the county’s RiverWalk that connects our riverfront communities and which, once completed, will be a 51-mile stretch from Yonkers to Peekskill,” said Westchester County Executive Robert P. Astorino.

With the addition of the new park, nearly 33 miles of the 51.5-mile RiverWalk trail have been completed so far, including existing paths and sidewalks. A second Tarrytown segment was constructed through the Kraft Foods and Lyndhurst mansion sites.

Parks important part of sustainable economic development
Public parks are important for a sustainable economy for the region. According to a 2008 study by Tourism Economics, Inc. of Wayne, Penn., based on data from the NYS Department of Labor and U.S. Department of Commerce, each year the tourism industry in the 10-county Hudson Valley region generates $4.7 billion in spending, contributes $298 million in local taxes and is responsible for 80,000 jobs. Westchester County’s share of the valley’s tourism industry is large—equating to $1.6 billion in tourism spending every year that is responsible for contributing $102.2 million in local taxes and almost 22,800 jobs. Protected lands also help secure the valley’s place in the new green economy. A recent study by the Trust for Public Land notes that executives looking to relocate or start up firms rank quality of life—including an abundance of parks and open space—higher than housing, cost of living and good schools.

Speaking for Scenic Hudson, Ned Sullivan, the group’s president, underscored the project’s contributions to quality of life and the local economy. “At Scenic Hudson parks up and down the river, we see residents and visitors eager to connect with the Hudson River. This park creates another exciting destination for people seeking recreation and relaxation. Park projects like this create jobs, spur tourism spending and appeal to businesses, which are increasingly drawn to communities that offer parks and natural areas.”

Mr. Sullivan also thanked supporters who contributed to Scenic Hudson’s work on the park. He expressed gratitude for the generous $1 million pledge from Tarrytown philanthropist Kathryn W. Davis and for a zero-interest loan from The Pew Charitable Trusts that made the Davis funds immediately available for the project. His thanks also were extended to the Westchester Community Foundation’s Arnold and Olga Feldman Fund, the David Rockefeller Fund and Con Edison for donations and support they provided.

Kathryn W. Davis said, “Today’s success is an example of community at its best, of people coming together to pursue a common goal for the common good. We should all remember this as a wonderful example of what it takes to get things done! I applaud each person and every organization that has partnered in this park. My 80-year infatuation with the Hudson continues to thrill me, and being part of creating a new place for people to experience nature and access our great river makes me very happy and very, very proud.”
“As this project has been so many years in the making, it is very exciting to have now completed this waterfront park that is so actively used by people on a day-to-day basis. It is hard to envision that for over 100 years, this waterfront was private property,” said Joseph Cotter, president of National RE/sources, which specializes in redeveloping environmentally impaired properties.

Mr. Cotter’s Hudson Harbor development is underway and employs eco-friendly products and systems, including geothermal heating and air conditioning. “At Hudson Harbor, we’ve created a visually beautiful destination that incorporates enlightened design with a strong commitment to the river itself,” he added.

“This is an important step toward reclaiming the Hudson River,” said New York State Sen. Andrea Stewart-Cousins. “The new RiverWalk Park will have stunning views of the Hudson and a variety of recreational activities which will draw a great number of people to Tarrytown. It will be an economic boon for our businesses on Main Street and the surrounding areas, and a great option for residents looking to spend some time outside near the river. This is a great example of government leaders on all levels, private business and nonprofits coming together to produce something great for the community.”

New York State Assemblyman Thomas J. Abinanti said, “This is another step forward in the ongoing effort to make enjoyment of the Hudson River—the lifeblood of the community—accessible to everyone through a linear riverside park.”

Not able to attend the event but noted as a supporter of the project and of creating new places for people to connect with the Hudson River, Congresswoman Lowey said, “I am thrilled the new Scenic Hudson RiverWalk Park at Tarrytown will help Westchester County residents and visitors enjoy our region’s natural beauty. This is a wonderful example of federal and local governments working with the private sector to improve our community and make Westchester County an even greater place to live and work.”
Jay Burgess is the Director of Communications for Scenic Hudson.