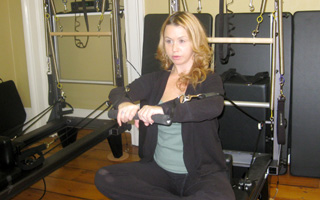 “I know they look like torture devices,” said Ceres Opanowski, as I straddled the reformer—a high-end piece of pilates equipment—for a demonstration in the exercise. Later she would show me how the reformer, with some small adjustments, converts into another model called the “tower.” These convertible machines (the studio is armed with five of them) are Opanowski’s only partners at Rivertown Pilates, located on Main Street, and they were not initially cooperative. “When these machines arrive they are totally apart,” Opanowski said. She has quickly adjusted, however, to the role of handywoman. “I got faster at it once I had two or three of them done. The first one took about two hours….the last two took about an hour.” Opanowski, who received her certification at the PhysicalMind Institute, has been a pilates instructor for five years. Rivertown Pilates is her first studio, as well as her first foray into business ownership. “You go into this working for other people and trying to build a clientele for yourself. I’ve always been an independent contractor which is kind of like running your own little business, but unless you’re a pilates instructor who wants to be something else, your ultimate goal is to open your own studio.” 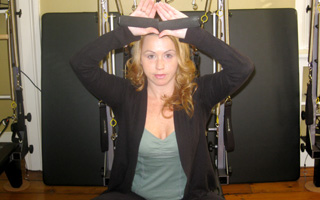 Originally called “Contrology” by its German founder, Joseph Pilates, the exercise was developed during Pilates’ detention in a British internment camp during World War I. Pilates—an expert in physical fitness who had previously worked in Scotland Yard, training British police officers—wanted to engage his cellblock in a physical fitness regimen so the detainees could maintain their physical and mental health in the harsh environment of the camp. He created the pilates technique for detainees who were too weak to leave their beds. In the process he constructed the first reformer by attaching bedsprings to the headboards and footboards of the prisoners’ bed-frames. “A lot of men think that pilates is for women,” Opanowski observed. “It’s pretty funny considering that it was invented by a man for men.”

Of course, nowadays pilates is more popular in the suburbs than it is on the cellblock, and Opanowski is happy to be back in her favorite town. “I loved Tarrytown when I was going to college. And all my friends are here, so it was only natural that I would come back. When I moved in 2005 it was just hitting its stride. The new businesses were coming in, and the older ones were still here. Now it has such a younger crowd. Its interesting to see how in a five-year period the whole town really has changed and grown.” Most of all Opanowski is grateful to be doing something she genuinely loves. “I love what I do everyday. It’s not like coming to work. I have students at 6am three or four times a week. I never mind getting up.” For further information telephone (914) 372-7373