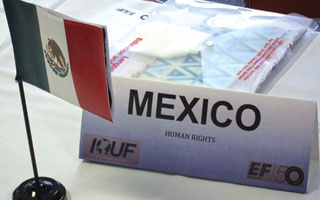 With more than 500 schools and offices in 53 countries to choose from, leaders in the EF (Education First) Mexican headquarters selected the EF International Language Center in Tarrytown to host its IQUF Intercultural Fest 2015. The annual event is one of EF Mexico’s largest, bringing together close to 500 students and teachers from across Mexico to New York and the United Kingdom.

The immersive language learning experience is driven by a series of project-based learning competitions. Each year several students and schools are recognized as the country’s top cultural ambassadors among those learning English with EF.
This year, the Tarrytown language center hosted a delegation of 250 students and teachers from 22 public and private schools across Mexico.  From March 30th to April 12th, IQUF participants honed their English language skills during on-campus classes, visited the Village of Tarrytown, New York City, Boston, and Philadelphia, and participated in mini-competitions and four signature events.
“After four years in the UK, we were excited to have our colleagues in Mexico bring part of the fifth annual IQUF Intercultural Fest to Tarrytown,” said Philip Johnson, executive director of EF New York. “The campus offered a perfect environment for the different events, proximity to important destinations along the east coast, and a wonderful community for students to
engage in during their visit.”
Organizers of the Inter-cultural Fest say they launched the event five years ago after hearing from teachers at leading schools in Mexico, who were looking for more creative ways to engage their students in English learning. 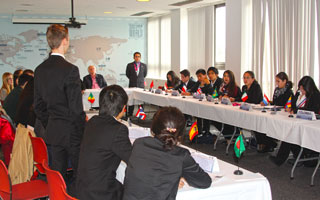 “There is really no better way to learn a language than to travel to a country where that language is spoken,” said Xavier Marti, country manager for EF in Mexico.  “We set out to create a really exciting 360-degree experience for our students that includes travel and games as well as more serious academic competitions and testing.  Participants earn points throughout the two-week competition, and we give out some fun awards at the end.”
The Intercultural Fest features four signature competitions that offer the largest number of available points.  Faculty from Hult International Business School, which is affiliated with EF, kicked off the series with a social business plan competition.  Later in the first week, participants were asked to perform a scene from a Broadway musical in English in front of judges.
The second week of competition started with a Tourism Show, where the students were assigned a region of Mexico and asked to come up with an interactive way to present it to judges and some of the other international students studying English in Tarrytown.
“The Intercultural Fest exposed me to another language and culture that will open more doors as I pursue my career in the future,” said Andrea  Bautista, a 17-year-old student from Universidad de la sale Bajio Campus Salamanca. “I especially loved living on the Tarrytown campus because it helped me meet people from different places. And I’ll never forget the New York lights and Times Square; it’s just like the movies.”
Participants capped off the 2015 Intercultural Fest with a full-day UN simulation.  The students formed a mock Security Council, Human Rights Council and Environment Program, debating several relevant global issues related to climate change, international security threats and development issues.
During the two-week Inter-cultural Fest, the teachers from Mexico also attended independent classes and met with their peers from the EF language center and EF Academy in Thornwood.  The group shared best practices for engaging students in immersive language programs, and discussed how activities that have real world or 21st century learning as a goal can improve academic outcomes.
“The Intercultural Fest has helped me prepare myself to work in the international department of the university,” said Liliana Batista, a 39-year-old teacher from Universidad de la sale Bajio Campus Salamanca. “My favorite moment was when our school was mentioned in the finals, that made me very excited, and I’m very grateful for the experience of working with all the students.”
Both students and teachers left the 2015 Intercultural Fest with a multitude of new experiences, lessons learned and quite a few life-long memories. Moreover, the zeal and engagement captured during the trip will carry back into their classrooms and continued learning in Mexico.

About the Author: Adam Bickelman