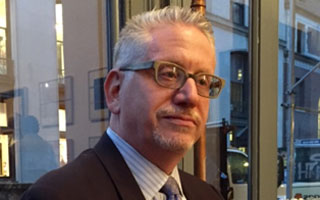 To some, Lyndhurst, at the southern end of Tarrytown, does not garner the attention of more familiar and easily recognizable historic attractions within the rivertowns. To this end we talked with its Executive Director, Howard Zar, who was quite forthcoming about his work and the direction of the one-of-a-kind historical treasure.

RJ. What are the funding sources of Lyndhurst and at present its financial security? In years past River Journal had been made aware of cutbacks with funding, and that has affected programs offered.

HZ. After a long period of quietude, Lyndhurst is thriving on all levels.  We operate at a break-even level and our annual budget continues to grow, reflecting significant increases in attendance, business activity and support from the community, foundations and government organizations. Of course, there’s a lot more that can be done, so we continue to solicit community and government support.

RJ. What specifically have you sought to contribute as the Director, and what gains have you seen since your arrival?

HZ. I want our audience to know that Lyndhurst is alive and vibrant and that there’s more here to do than just take a tour of the mansion. We have great theater and music series that utilize the mansion and different parts of the estate for performances.   That said, if you haven’t been on a mansion tour in a long time, you need to come back.  We’ve extensively restored many rooms in the mansion, which were starting to look a little long in the tooth and we’ve opened windows and cleared away clutter.  This includes a major restoration to the grand picture gallery and the state bedroom as well as selective reintroductions of pieces from the collections that were previously in storage.  Also, we’ve opened up most of the rooms so that you really can enter them and get a real feeling of what they were like rather than just peek in.  In addition, we have an exhibition of furniture in our carriage house gallery at the end of each tour that exhibits major pieces of furniture that would otherwise be in storage. Also, since we change our decorations and programming during Thanksgiving and Christmas, the house always looks different and there are things we are constantly bringing out of our 10,000 piece collection.

I also want our neighbors to know how important Lyndhurst is.  We are surrounded by many well-known Hudson River estates.  However, many architectural historians consider Lyndhurst  the most significant house of the 19th century in the United States, and Lyndhurst’s architect, Alexander Jackson Davis, was the Frank Lloyd Wright of the 19th century.  Lyndhurst’s collection of paintings, furniture, decorative arts and textiles is extremely important and incredibly well documented.  Because Lyndhurst was a country house, it was sold with its contents and we basically retain close to 80% of the major furnishings from when the house was first occupied in 1842.  The house is well documented by death inventories and is extensively photographed from 1870 through the 1960s.  So, when you come to Lyndhurst, you are actually seeing the rooms as decorated by one of the owners with the pieces they owned based primarily on photographic evidence.  This is extremely rare.  Most houses lose their contents and are not well documented.  So, usually what you are seeing in many historic houses is a redecoration by a later owner in either a 1920s or 1950s style.  Lyndhurst is a rare example of where you can see what was actually in the rooms going back as far as 1842.  Many rooms are some of the only places in the country where you can get an accurate idea of how people furnished their homes at the time.  The Lyndhurst dining room reflects the high style taste at the end of the Civil War and the Grand Picture Gallery reflects the purchasing power of American money at the beginning of the Gilded Age.

RJ. Where do you see the most involvement for the Historic Site? Visitors, special events, filming, etc.? What is the annual attendance from the public?

HZ. Last year, Lyndhurst’s attendance increased from approximately 50,000 visitors annually to close to 75,000 – a 33% increase.  This comes in a combination of forms—whether taking a mansion tour, visiting the grounds, coming to a lecture, theater or music performance.  Visitation numbers do not include the many people who walk the property daily accessing us via the Old Croton Aqueduct or the Westchester RiverWalk.  Thus, the annual total of visitors is quite high.  Many people don’t know that we are also used quite frequently for weddings, charity walks, charity benefits, private parties or corporate outings. As a matter of fact, we’ve been told by organizers of charitable events that when it’s announced that the event will be held at Lyndhurst, ticket sales go up. Similarly, we are an often-used site for filming and shooting, whether for major motion pictures, television shows, reality shows, commercials or magazine editorial shoots.  Often, the iconic mansion doesn’t even appear in the final product.  Since we have 67 landscaped acres and 15 buildings, many films use one of our less recognizable locations.  A recent television show filmed in our root cellar, gardener’s cottage and lower landscape with the mansion nowhere to be seen.

However, I think the biggest impact that Lyndhurst can have on the community is in its landscape.  Because Lyndhurst mansion is so well recognized, very few people realize that its landscape is equally old and equally historic.  The first part of the landscape was a series of rockeries below the mansion intended to provide picturesque views of the mansion and the Hudson River.  By the 1860’s, multiple rare specimen trees were added and the largest private greenhouse in the world was built.  In the late 19th century, a bowling alley was added. In the early 20th century, a swimming pool building, children’s playhouse, rose gardens and perennial gardens were also added.  In the 1940’s the Duchess of Talleyrand brought  garden sculpture from her former estates in France to Lyndhurst.  Thus, the Lyndhurst landscape was in continuous development from the 1840s through the 1940s.  The landscape was extensively mapped and photographed starting in the 1870s, and while new features were constantly added, there was actually very little that was torn down.  So, the landscape is an incredible record of how estates in the Hudson Valley developed from the 19th into the 20th century.  We are currently doing a great deal of work on the landscape.  We are completing the full restoration of the riverside bowling alley after 30 years.  Currently, you can walk up on the bowling alley veranda, as we restored the front steps this summer after staying off the area since the 1960s. The veranda offers incredible views of the Hudson River and Tappan Zee Bridge.  Because the windows of the bowling alley are so large, you can also see all the rooms and the progress we’ve made in restoration.  By next spring, the bowling alley will be open for special tours and for party rentals.  We’re also trying to restore the path that led from the mansion veranda, through the rockeries and down to the bowling alley, so visitors will have another structured way to view the landscape.  We believe that there are a lot of people who like to come and just experience the property without visiting the mansion.  So, we’re restoring more of the historic landscape, refurbishing public restrooms and trying to get more food service onto the property.  That way, people can come and experience the beautiful landscape in all seasons, whether to see the flowering trees in the spring, the beautiful rose garden in the summer or the changing leaves in the fall.
Once the New NY Bridge opens in 2018, we believe that both the Old Croton Aqueduct and Riverwalk paths, which meet at Lyndhurst, will be fully continuous both to the south and north and that we will see a major increase in recreational tourism at Lyndhurst, whether walkers, bikers or those who just want to drive in and hang out.

RJ. October brings Halloween and Sleepy Hollow brings the hordes. What is Lyndhurst offering to residents and visitors alike?

HZ. Lyndhurst offers a wide variety of programs during October, including the only daytime Halloween tour.  This is our third year of offering “Jay Ghoul’s House of Curiosities,” an evening theatrical tour through the first floor and basement of the mansion.  This year’s all new theme is “Lyndhurst, the Disenchanted Castle.”  If you’ve ever wanted to live in a castle, find out what it’s really like from our disenchanted crew of castle dwellers including Maleficent, Henry VIII and Anne Boleyn, Sleeping Beauty, Dracula, the Wicked Witch and, of course, Lyndhurst’s own Jay Ghoul. This is a 30-minute romp through Lyndhurst showcasing its beautiful seasonal decorations and spooky and eerie lighting.  One visitor described it “like going on a Disney ride.”  It’s not bloody and so is appropriate for most children.   During the day, we offer Halloween tours with a twist, featuring the first and second floors of the mansion.  For those wanting to see the mansion and the beautiful seasonal decorations, this is the better option as the focus is on the many gothic revival furnishings we bring out of storage and display during October only.  The portrait of Jay Gould’s mother-in-law makes its appearance during October and many find this to be the scariest thing in the house.  Many people come to enjoy the changing leaves and just spend the day visiting the grounds.  On the main drive from the greenhouse to the mansion, we’re installing our tenth edition of the Scarecrow Invasion.  Scarecrows are decorated by local schools, artists and businesses.  Directly in front of the mansion is our skeleton town and directly behind is our spooky graveyard.  Many people come, either day or night, to see the scarecrows and skeletons and take innumerable selfies with our goolish gathering.  Please note that daytime tours often sell out by 1 pm.  We strongly recommend booking online in advance or booking tours in the morning as these often tend to be less crowded.  All tickets are available online at Lyndhurst.org.

RJ. Moving from October into November and December, what programs define Lyndhurst as a “destination”?

HZ. From Black Friday until the end of the year, we mount “A Very Duchess Holiday.” Lyndhurst is elaborately decorated for the holiday season and we display gowns that belonged to Anna, Duchess of Talleyrand, the last owner of Lyndhurst, in holiday-themed vignettes throughout the mansions. Anna was railroad baron, Jay Gould’s youngest daughter and was both a Duchess and a Princess. So, if your only frame of reference for how a princess lived is a Disney cartoon, come to Lyndhurst to see the real thing.  We also have “Mr. Dickens Tells a Christmas Carol” on weekends throughout the month.  M&M Library Theater, our resident acting company, recreates Charles Dickens readings from a Christmas Carol that he performed throughout the United States during the 19th Century.  These performances are held in Lyndhurst mansion and combine the Dickens story, the elaborate decorations and the ability to attend a performance in various rooms of the house.  It’s extremely popular and performances sell out.  During the month, our carriage house is also elaborately decorated and we hold teas there.  Because of the decorations, a lot of families like to come and take holiday photos in the carriage house.  In November, we’ll post more information with online links to purchase tickets.  So check back at www.Lyndhurst.org.