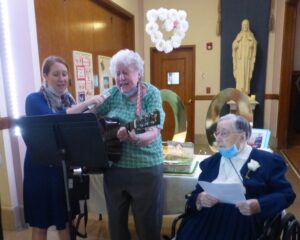 The year 1920 “was the worst time in Ireland,” says Sister Canice, R.S.H.M., of Marymount College and Convent in Tarrytown. “Peace with England wasn’t secured until 1922.”

She recalls the British soldiers as “the black and tans,” and to this day despairs of the division of Ireland into 32 counties.

The well-told tale of Ireland’s conflict with England is coincident with her own birth, and speaks to her love of homeland and passion for knowledge.

Sister Canice was born in County Kilkenny on June 27, 1920. She left in 1946 and made her way to Sacred Heart. At the Marymount Convent, she joined several members of her home parish and began serving the community. She received her degree from Hunter College in History and Literature.

‘SOMETHING MAGICAL’
County Kilkenny remains Sister Canice’s favorite place in the world, with New York City a close second: “There’s something magical about so many different people living together.”

At 100 years old, Sister Canice can describe both historical events and her lessons from third grade with astonishing accuracy. “Memorization trains the mind,” she says. “That’s how they taught us back then, and I don’t know why it is out of fashion now.”

As she recalls memorizing a poem in elementary school by acting out the lines and drawing the images, it is clear that she has a point.

Doing good deeds for others was, and is, her motivation in all that she does.

GLOBETROTTING NUN
As a nun, she was able to travel the country and teach at more than 10 Catholic schools. She has visited all but one (Hawaii) of the 50 states, taught in Canada and Rome, and studied at the University of New Delhi in India.

Even now, Sister Canice says she cannot pick a favorite because, “I have regard for every place I have ever been and taught.

Everywhere she traveled, Sister Canice tried to impart the values of truthfulness and respect. “I tried to teach patriotism, love of home and neighbor,” she says.

“If you don’t respect your country, then you don’t respect the people who make it up.” To this day, Sister Canice reads The New York Times every day, along with several local Irish papers that her niece sends her. Her political opinions are complex and rooted in honesty and kindness.

PROUD MATERFAMILIAS
Though she comes from a small family, her only brother had seven children who went on to have many children of their own.

Sister Canice is aunt, great aunt, and great-great aunt to an emerging new generation. She loves to talk about her family, keeping up to date with their work and passions. While she is sometimes reluctant to discuss her own accomplishments, Sister Canice happily tells stories of her nieces’ and nephews’ successes.

When describing her centennial birthday, Sister Canice says, “It was lovely, but mostly I enjoyed it because everyone else enjoyed it.”

She loves to witness and be part of other people’s happiness. One of the best parts for Sister Canice was that a former student, now a priest, came to perform the mass during her celebration.

Her greatest gift to those she taught, wrote to, and cared for is how selfless she was in her giving.