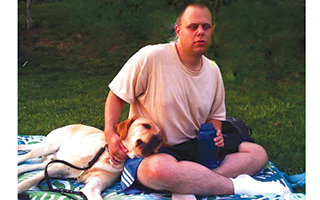 Readers of this publication may be familiar with seeing a young man and his guide dog zipping around downtown Tarrytown. Some of you want to pet the dog, which is, by the way, a no-no, as service dogs are “on duty” and shouldn’t be distracted.  Some of you may want to help when you see a visually impaired person at a crosswalk or checking out in a store.  Some of you may wonder what it’s like to get around with a disability.

26-year old Eric Brinkman and his dog Chester are friends of mine (maybe Chester even more than Eric, as despite his training Chester gets very excited when he sees me;  maybe because he had a sleepover at my house once when Eric had someplace to go; maybe he thinks of my dog when he sees me; maybe he just likes me, I don’t know, but no one greets me like Chester does, not even my own dog!). Mr. Brinkman has lived in Tarrytown for almost five years, since graduating from college and getting a job at New York Life as a computer programmer.  More recently he obtained Chester from Guiding Eyes for the Blind—his first guide dog even though he was born with a visual impairment. I have the same type of questions you may have about navigating the world, but since I know Mr. Brinkman I have witnessed his use of modern technology, and am amazed at the rapid developments in technology and how it helps not only us sighted people, but how so many of the gadgets, apps, etc. we all use can benefit those with disabilities.

First, to dispel some myths: most people with a disability have some residual vision, hearing, sensation, etc.  Except for someone like my maternal great-grandmother, who had glaucoma and ultimately had her eyes removed, so obviously she had no vision at all, most blind people do have some sight, just as most deaf people have some hearing, and people who use wheelchairs often have some movement and can feel some sensations.  The things we read as kids with dramatic descriptions like, “The illness left her in total darkness.” or “He never heard a sound again in his life.” are the exception, not the rule, and usually incorporate poetic license.  Having worked in a deaf education classroom for a time when I was in school, I can tell you that hearing impaired kids can be some of the loudest, most gregarious kids, as they use their residual hearing to take in the sounds around them and communicate with each other at high volume. Mr. Brinkman is no exception, and uses his residual vision to his advantage.  He is particularly comfortable at night, when the contrast of storefront lights is easier to see without the glare from the sun, so he is better able to differentiate his surroundings.  He can also put things very close to his eyes and see some of what he wants to see, having a 24-inch computer screen at work.

Mr. Brinkman and I sat down over lunch and I asked him all about the technology that he uses to get around.  My great-grandmother died in the mid-1970s, when there was little technology, and because she became blind later in life, she did not have the type of training from an early age that Mr. Brinkman had.  She had little independence (although somehow she could still fix a torn hem, and could always smell pasta cooking, like a good Italian woman).  She spent a lot of time listening to an Italian radio station and engaged in her own thoughts.  She didn’t have a guide dog, but my grandmother’s poodle, never trained for anything except to be a house pet, would often walk around the house in front of her and bark if there was an obstacle or danger in her way.  Family lore says that Suzette kept Grandma from falling down the stairs at least once.  Mr. Brinkman, on the other hand, was taught to read Braille while his classmates were learning to read print, has used a cane his whole life for traveling, and utilizes current technology such as GPS systems, iPhones, and screen readers to enable him to get around, communicate, and have a good job. My great-grandmother didn’t go out alone after losing her vision; Mr. Brinkman hops on the train and meanders around midtown Manhattan, worrying his mother but enjoying himself.

Mr. Brinkman is a young man, but has already seen many changes in technology, such as a recently added app to his iPhone – a money reader.  Money readers have been around for some time, where a blind person could scan the money and be told the denominations, but they were too large to carry around. Now, with the new app, which he has had since 2011, Mr. Brinkman can identify paper currency right at the checkout counter without needing to either ask for help or trust that he is being given correct change.  Similarly, other apps that many of us have on our phones and use simply for convenience help Mr. Brinkman get around in a sighted world.  A GPS app that talks to him, voice recognition software that allows him to text his friends, and screen readers that help him do banking online, all make his life easier.  Mr. Brinkman used the word “empowering” when talking in particular about the screen reader technology.  He recalls being about nine years old and being able to use a computer because the screen reader could read the text aloud to him. It sparked an interest in technology that ultimately led to a degree in computer science.  We sighted people may not think about how cumbersome Braille books are, but apparently they use about three pages per page of text and therefore take up a lot of space and are quite heavy.  In school he would send off a book to have it made into Braille, or if it was not already available on tape, he could get it read and recorded for him, perhaps by his tutor.  In math, a huge component of computer science education, diagrams had to be raised so Mr. Brinkman could feel them with his fingers.  While a screen reader may still not be sufficient for things like diagrams, and it can’t “read” pictures, it simply informs him that a picture is embedded in the text. Being able to get through the text on a screen means that Mr. Brinkman doesn’t need someone to come over and help him, and he can independently pay his bills, go over his credit card statements, read his email, go on Facebook and other social networking sites, and the like. He has way more independence than he would have had even five or ten years ago, because of advances in technology that may or may not have been intended to be used by people with disabilities, but are certainly helpful.

Prior to using voice recognition software Mr. Brinkman had spent his childhood learning to touch type, and told me that all his classmates did this as well—it was simply part of the curriculum in his suburban public school.  When he works at his computer he usually types on the keyboard, and until a couple of years ago used the iPhone keyboard to text his friends.  He also spent his childhood watching “described movies” in which there is an audio track on the movies that describes the action.  Ironically, even though Mr. Brinkman has very little vision, he considers himself to have very good visuospatial skills (usually required to study mathematical concepts such as geometry) and feels that hearing rich descriptions of the actions of the movies helped him to develop a visual and spatial sense of the world around him.

As I mentioned, many of us may see a person with a disability and wonder if we should offer help.  While a gentle offer of help can be welcome, obviously grabbing a blind person without warning and leading him somewhere can be quite jarring, not to mention rude, and even if help is offered appropriately, Mr. Brinkman will often decline the offer, as he told me that when he has to navigate a place on his own he learns it better and can get around better if he visits it again.  Presumably those visuospatial skills that help him to lay out the world in his mind are put to better use if he has to figure out how to get around an area by himself.  For this reason he often enjoys going to events and activities on his own so that he can get the lay of the land without his friends helping him.  Having Chester now helps with staying out of danger, as Chester won’t let him step into the path of an oncoming car, but Chester can’t be told to navigate to C-Town or find a bathroom.  He’s smart, but not that smart, so Mr. Brinkman needs to be aware of his surroundings so he can tell Chester where he wants to go.

Other supports that Mr. Brinkman can use are: scanning entire books through a typical desktop scanner and then having the computer read the text aloud to him; Braille displays that he uses with his computer (that are apparently quite expensive, but that his job provides for work); bringing his iPad right up to his eyes so he can better watch a movie—best done when no one else wants to watch the movie with him, of course; and laptop computers (that enabled him to take notes in class while in college). iTunes is also helpful, as Mr. Brinkman is an avid music lover, and plays guitar and piano himself, but getting out and shopping for music can be hard for someone with a visual impairment.  Going online and purchasing music on iTunes, or using Spotify, Pandora, and other sites to hear new music keeps him on top of the music he enjoys.

Mr. Brinkman’s degree is from Marist College, which has a good reputation for supporting students with varying disabilities.  Mr. Brinkman felt his professors were amenable to meeting during office hours outside of class to go over what he may have missed during a lecture, and that the Special Services Department was helpful to him.  However, being on campus without a car was hard, and being in a bigger city might have been easier for his independence.
Every day more and more technology is being developed, and while many of us believe that our dependence on technology has gone too far, for some people, the appropriate use of technology helps them lead more independent and productive lives.  Whether that be the gadgets and apps that Mr. Brinkman uses, or the technology previously used mostly by deaf individuals, which most of us now know as instant messaging, or voice recognition software that can help anyone, from those with a writing disability to those without the use of their arms or hands, to put their thoughts on paper, technology is helping people with disabilities blend into the world better.  In the past a visually impaired person would have found it difficult to have a career in computer science, but new technology helps break down barriers.  When I think of my great-grandmother, even after twenty years of blindness, still not having a fraction of the independence that Mr. Brinkman has, I realize that while some of that is the difference between a congenital and acquired disability, and the training that goes with it, some is also due to the current technology that makes navigating the world easier and safer.  I’m eager to see what new gadgets will be coming out next to help people overcome their challenges.

And remember, you can say hi to Eric, but no petting Chester!