The truth of this pandemic was coming in our door every day.”

That is how Carmine Carpinone, the owner of Dwyer & Michael’s Funeral Home, in Tarrytown, concisely captures the grim reality of COVID-19, a cloud so ominous that it cast a powerful pall even over his normally somber business.

“In the last six weeks, I have done a third of the funerals I normally do in an entire year.”

That is how Jason Chiaramonte of Peekskill’s Nardone Funeral Home vividly assesses the unprecedented frequency and number of decedents that have passed through his portals during the pandemic.

Carpinone remembers the exact date that his life and business became dominated by the virus he had mostly heard about from the news: April 4th. A family owned funeral home in Tarrytown, Carmine and his son had to hire and deputize extra staff to handle the influx. He describes it “getting worse and worse,” as he received calls from desperately overloaded business friends in the five boroughs. When the disease struck the River Towns, he says they had to turn people from out of county away: “I didn’t want to, but we needed to serve our community first.”

The shortages of protective equipment, and the fear, affected the funeral homes. As the scientific community learned more about the virus, the funeral directors adjusted their behavior and what they could offer to families. Carpinone compares it to the early days of the AIDS epidemic, when no one knew how HIV spread or how one became infected. The regulations at cemeteries in the area changed frequently and often differed from location to location.

As the pandemic spread, regulations at cemeteries in the area changed frequently and often differed from location to location. Flowers became forbidden, and families had to have curbside religious services. Carpinone recalls how one family came to his home to say goodbye to their loved one and had to stand in the doorway to recite a Spanish mass.

UPSIDE DOWN
To pierce the dense data of coronavirus’s death toll, which is shrouded in cold statistics, we spoke to both funeral home directors, who candidly gave us a keen sense of the challenging and sensitive humanity required by their profession.

“The coronavirus has flipped the funeral industry upside down,” says Chiaramonte. “No one could have predicted the surge of deaths, inadequate supplies of personal protective equipment (PPE), and not being able to hug those who needed it the most — the bereaved. This has a tremendous effect on me as a funeral director, because what I love most about my job is connecting with people.  And I can’t do that anymore without fear of becoming sick myself.”

As the scientific community learned more about the virus, the funeral directors adjusted their behavior and what they could offer mourners.

“My job is to support and service those in their worst days,” says Chiaramonte. “These are people who most likely had not seen their loved one for weeks due to visitor restrictions at the local hospitals. Then they experience this tremendous loss, and they don’t get the chance to say goodbye before the person passes away.”

The funeral arrangements are dictated by the pandemic, instead of by the families. One of the tragedies is, as Chiaramonte said, “This pandemic has taken away the basic right for people to grieve.” Funeral directors use their experience and resources to provide comfort to the mourners.

Ultimately, both Carpinone and Chiaramonte mourn with the families they serve. Their job is one of human connection. Even in these extraordinary circumstances, Carpinone says he still receives letters from families thanking him for his respect and patience.

“This pandemic has taken away the basic right for people to grieve. It’s heart breaking.” 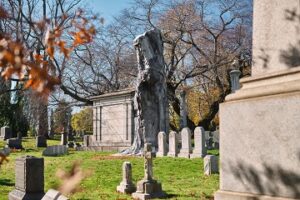