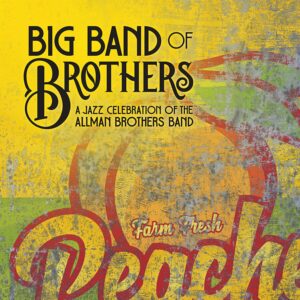 Big Band of Brothers: A Jazz Celebration of The Allman Brothers Band will be performing at Tarrytown Music Hall on February 24 at 8:00pm. The band features Jaimoe, Lamar Williams Jr. and Sammy Miller & The Congregation.

“For the Big Band of Brothers album, we began with timeless Allman Brothers Band classics, commissioned brilliant big band arrangements for them, and brought them to life through passionate performances – all sweetened by contributions from distinguished guest artists, said Project creator and co-producer John Harvey.”

The album garnered praise from both jazz and ABB fans, and from critics in publications such as Downbeat: “Albums offering jazz renditions of rock songs are commonplace nowadays, so the element of surprise has faded. But A Jazz Celebration Of The Allman Brothers Band is an accomplishment of a higher order.”

The Allman Brothers Band Museum in Macon, GA (known as The Big House) will be along for the ride setting up a mobile exhibit at each tour stop showcasing some of the largest collection of Allman Brothers Band memorabilia in the world. $2.00 from every ticket sold will benefit the not-for-profit 501(c)(3) Big House Foundation whose primary mission is to preserve and promote the rich musical heritage and inclusive diverse culture of the Allman Brothers Band through music education programs and exhibits.