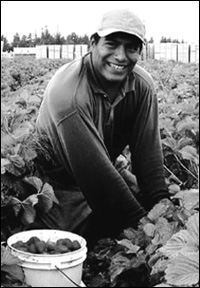 The increase of Hispanics coming to this country is something Americans know is happening and yet don’t know much about. To better understand this influx, one must first recognize their reasons for coming.

Unfortunately, there are many misconceptions and preconceived notions when it comes to the issue of Hispanic migration.

According to a study done by the United Nations, approximately, 175 million people move every year. Though this number does seem large, it in fact translates to about 3% of the global population. A small percentage like this dispels the false ideology that migrants are coming in by “the hordes” or that there are any “mass migrations” coming into the U.S. Another false notion is that migrants are coming to this country because they are poor and destitute. In fact, the trip to the United States is not something easily accomplished nor is it inexpensive. Ultimately it costs money to be able to migrate to the United States and studies reveal that the poorest countries do not the produce the most emmigration. So what are the reasons for Hispanics coming to this country?

Opportunity for employment is perhaps the most tempting reason for migration to the U.S. In this country we have what is considered a “dual labor” system. That means there are two types of jobs: skilled labor and work unwanted by a skilled labor force. Those unwanted jobs are what Hispanics often come for. Since more and more Americans are refusing to fill these “unskilled” positions, a large demand is created. Migrants fill this demand.

Since the notion of migrants being poor is dispelled it calls into question where their money is going. Hispanics often send most, or at least a good portion, of the money they make to relatives and loved ones back in their home country. This money being sent back is referred to as remittances. The actual total dollar figure for this tax-free, unregulated money is astounding. It is estimated that migrants send home $25 billion annually. On a small scale, this money is helpful for the individual relative or family; however, on a large scale its impact is far more impressive. The money stimulates the country’s economy in a major way. In fact, remittances provide more money for Hispanic countries’ economies than foreign aid, corporate investments, and the World Bank combined. This money leads to the development of these countries where traditional employment expectations are changed. Hispanic migration to the U.S., then, is also due to the socio-economic development of these foreign countries.

Modernization in these countries is creating an expectation for people to migrate to the U.S. for employment. Studies show that more women are coming here than in previous years. This is an example of women being allowed to enter the workforce: a direct result of modernization in these foreign countries. Originally, the expectation was for young males to apply for h1b visa to come to this country in order to pay for the rest of the family to enter. Now, what is known as circular migration is becoming more common.

Circular migration, or trans-national migration, is when people come to the United States to work but not necessarily to reside here permanently. Many migrants will work for a period of time and then return to their country. It is not uncommon for migrants to travel back and forth every year. Reasons such as these often make it difficult to come up with exact numbers of foreign- born people living in the U.S.

What is known is that migrants are coming in through what are termed the “gateway states.” These are New York, New Jersey, Florida, Texas, Illinois, and California. New York City, Los Angeles, Miami, and Chicago are the huge settling grounds for migrants but recent trends reflect more migrantion to the suburbs and rural areas surrounding these cities. Westchester County is one such place.

According to the Immigrant Health Project, a group conducting studies on immigration in the seven counties of the Lower Hudson Valley, since 1990 the total population of Westchester County grew 5% but the foreign-born population grew 24%. It is estimated that about one-fifth of Westchester’s population is foreign-born. Areas of high concentration include: Sleepy Hollow, Greenburgh, Mount Vernon, Yonkers, and Ossining. In Sleepy Hollow, 47.6% of the foreign-born have come to the Village since 1990. People from the Dominican Republic and Ecuador make up the majority of this population.