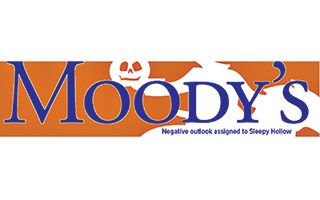 Moody’s, one of the three major credit rating agencies, recently changed the Village of Sleepy Hollow’s credit outlook from stable to negative. The company provides financial research on bonds issued by commercial and government entities. The creditworthiness of borrowers is rated between Aaa, the highest quality to C, the lowest quality. Moody’s ratings seek to measure the expected losses in the event of a default.

In 2011, The Village of Sleepy Hollow sold Public Improvement Serial Bonds, Series 2011A valued at $7,875,000, receiving an A1 rating from Moody’s Investor Service at that time. Their opinion affirmed the A1 rating on the Village’s outstanding general obligation bonds affecting approximately $19.7 million. These bonds were secured by the Village’s unlimited tax pledge. Proceeds of this issue were to permanently finance currently outstanding bond anticipation notes originally issued for various capital projects. Over the long-term, these bonds were rated as an upper medium grade and low credit risk. This A1 rating is considered to have the best ability to repay short-term debt. In Moody’s 2011 report, “The Village’s financial position was expected to remain stable given balanced financial operations and strong growth in reserve levels to $2 million or 15.8% of revenue in fiscal 2010 since fiscal 2006 when total fund balance was $642,000 or 5.7% of revenue. In fiscal 2010, General Fund balance increased by a sizeable $163,000, which increased total fund balance to $2 million or 15.8% of revenues. Despite a negative performance of licenses and permits revenues ($102,000 less than budget) the surplus was primarily due to expenditure savings ($830,000 less than budgeted).”

According to Moody’s, a rating can go down when continued decreases in taxable values have a material impact on a village’s size or revenue raising flexibility. In April of this year, Moody’s gave the Village of Sleepy Hollow the same A1 rating but changed the credit outlook from stable to negative. What caused the investment analysis to change? Moody’s Investor Service defines a rating outlook as follows: “A stable outlook indicates a low likelihood of a rating change over the medium term. A negative, positive or developing outlook indicates a higher likelihood of a rating change over the medium term. A rating committee that assigns an outlook of stable, negative, positive, or developing to an issuer’s rating is also indicating its belief that the issuer’s credit profile is consistent with the relevant rating level at that point in time.”

In the case of Sleepy Hollow, Moody’s considers the declining fund balance over the past three years and struggle of management to regain and restore reserves to healthy levels a reflection of the Village’s weakened financial position. Their financial analysis included a review of historical financial performance as an indication of Sleepy Hollow’s ability to weather budgetary pressures stemming from economic downturns.

Two major components are considered in their analysis: cash reserves and other liquid resources that reflect on the quality of financial operations, the local government’s ability to adjust to changing circumstances, and the potential for future
stability or instability.

In May 2013, an independent audit by O’Connor Davies reviewed Sleepy Hollow’s finances. The audit indicated that as of the close of the fiscal year, the Village’s governmental funds (exclusive of the Capital Projects Fund) reported combined ending fund balances of $2,239,777; a decrease of $77,471 from the prior year’s fund balance of $2,317,248. At the end of the fiscal year 2013, unassigned fund balance for the General Fund was $212,537 or 1.47% and in 2012, $480,097 or 3.33% of total General Fund expenditures and other financing uses. This indicates a decline in the unassigned fund balance for general activities of the Village. Unassigned fund balance provides a financial cushion to a government entity against an unexpected or unforeseen expenditure and serves as a useful measure of the net resources available for spending at the end of the fiscal year. Portions of unassigned fund balance can be used to offset tax increases to residents in the budget. The remainder of fund balance is either classified as Nonspendable, Restricted or Assigned to indicate that it is not available for new spending, such as the Sewer and Special Purpose fund balances. At the end of the 2013 fiscal year, the Village had total bonded debt outstanding of $16,665,000. As required by New York State Law, all bonds issued by the Village are general obligation bonds, backed by the full faith and credit of the Village. It is noted in this financial audit report that increases continued in the cost of providing health insurance and retirement benefits to employees over the last 3 years. These costs, along with paying out retroactive salary increases for several years, put a strain on available Village resources in 2013 and hampered the ability to contribute more to the unassigned fund balance.
The ongoing economic decline also had an impact on the local economy, making it more difficult to increase fund balance. Falling housing prices, slower new construction starts and higher unemployment all contributed to lower operating revenues available to the Village. The audit report noted, “Sleepy Hollow continually attempts to eliminate or reduce non-essential spending, while closely monitoring the costs of the programs that our residents rely on.”

Obviously, the future sale and redevelopment of the former GM site will inject much needed tax revenue to the community helping to restore unassigned fund balance and a stable credit outlook. The water and sewer funds are now self-supporting and no longer rely on general fund subsidies. Sleepy Hollow’s credit rating could go down further if there are additional declines in fund reserves as well as significant increases in the debt burden or further erosion of a tax base that provided 67% of the Village’s total revenue for 2014-2015.