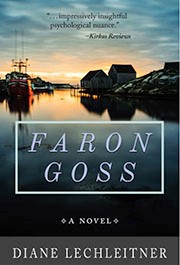 EDITOR’S NOTE: FARON GOSS has been named the Winner of the 2021 FOREWORD Reviews Indies Award for General Fiction.

When the body of Alison Goss washes up on Menhaden Island, in the Gulf of Maine, the working-class fishing community of hard-hewn ways and salty perspectives is faced with handling the future of her unusual son, Faron.

They soon discover how different he is, in strange but endearing ways, including his stunning artistic talent.

Bound together by weather and sea, Menhaden neighbors with good hearts and blunt opinions overlook Faron’s peculiarities. But their nurturing embrace cannot completely erase his troubled past, which eventually morphs into a life-changing event, forcing him to confront lingering memories.

Faron faces that which haunts him, works as a sternman on a lobster boat, and paints in his studio. When he meets a bird-watching woman who has returned to Menhaden to live in her grandparents’ house, his life takes another unexpected turn.

“To the men on the island Alison Goss was an intriguing, rawboned beauty. To the women she was a dark, willowy threat. So when she fell overboard and drowned on a calm, sunny afternoon in July, only some of the islanders cared. No one even knew she was missing until the next morning when Myron Sprague checked his lobster traps and found her dinghy tangled in one of his sets, held fast by an oar that was still mounted in its brass lock. Not long after, Alison herself drifted into Gallager’s Boatyard and got wedged between the pilings at low tide.

Hodie Ebel, the harbormaster, found the body. It was all fouled in seaweed. Crabs and gulls had pulled and pecked at the bloated corpse—the eyes were gone—sockets cleaner than crow-picked roadkill. Hodie tugged at his scraggly beard—a nervous habit—and went inside the chandlery to find Jarry Gallager.

Jarry was bent over a case of snaps and shackles, cursing.

“Sent the wrong stuff. Again.” Jarry’s stringy blond hair always looked liked it needed washing. He pushed it out of his face and glared at Hodie. “Need something?”

“Have to use your phone.”

Jarry listened as Hodie called the sheriff to report the gruesome discovery.

They went outside and snagged Alison with boat hooks, dragged her up the ramp into the parking lot, covered her with a blue vinyl tarp, and went for an early lunch at Scuppers.”

“Readers looking for a poetic, evocative description of coming of age in a Maine lobstering community will find Faron Goss a lovely literary piece . . . a tender, expressive story . . . which brings to mind the gentle local color embedded in the best-selling Where the Crawdads Sing.”         —MBR

“With vivid prose, Lechleitner depicts the beauty and hardship of life on Menhaden Island, the interwoven relationships of its crusty but close-knit residents, and the complex, unassuming boy who works his way into their hearts. Faron Goss is, in every way, a beautiful first novel.”   —Darcie Chan, NYT bestselling author

Diane Lechleitner is an artist and writer who lives in Sleepy Hollow, New York.