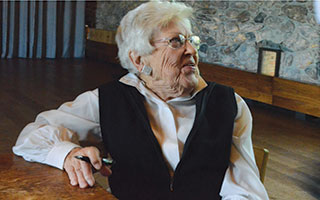 A book fifty years in the making has been published, Jeanne Kostich, Pocantico Hills resident since 1963, has written: A History of Pocantico Hills from 1880 to the Present. “It’s a gift to be interested in art,” said Kostich. She was one of the lucky ones granted this gift, as well as her interest in history. She explained that it is the people and their stories that draw on her
passion for history.

“When I moved here I suddenly realized that there were a great many elderly people who knew a lot of the history of the area and they weren’t going to be here very long,” said Kostich. “So I started interviewing them, taping them, talking to them.”

One of her favorite parts in the book is about the Union Church. She details the stained glass windows in the Church explaining how the two large windows came to be. Nelson Rockefeller had wanted Henri Matisse to design one of the windows, but originally Matisse refused due to his age. The book goes into detail about how Matisse eventually ended up creating a stained glass window for the space. Marc Chagal also added his mastery with another stained glass window. Kostich goes on to explain all about the Rockefeller family and the collaborations and friendships they created to help make the area what it is today.

How Jeanne Kostich came to this area is an interesting story in itself. She was born in Minneapolis, Minnesota and chose to study her two passions in college – art and science – at the University of Chicago. After graduation she moved to Paris and studied there for four years.  Upon returning to the United States and Manhattan in particular, Jeanne Kostich began the conservation department of the Museum of Primitive Art, located on West 54th Street.

Nelson Rockefeller had founded the Museum of Primitive Art in 1957 and it opened  to the public in 1958.“Because I had a background of anthropology and art, I became a founding staff member,” said Kostich. Her career at the Museum started to bloom, and her idea of writing a book was shelved. “As more universities started having programs in conservation, I had many interns to train,” Kostich said about her time in the Museum. Eventually, the Museum was given to the Metropolitan Museum of Art where Rockefeller  had a dedicated wing built for his primitive art.

Although Kostich was focused on the Museum for many years, she always had the book idea and Pocantico Hills in the back of her mind. The Rockefellers owned the land of Pocantico Hills, and when John D. Rockefeller, Jr. died, the family knew they wanted to sell some of the houses that had been built in the area. Charles Keppel, then the Treasurer of the Museum of Modern Art and the Museum of Primitive Art, suggested that Kostich and her family look into renting one of these original six houses. Kostich’s daughter was 4 at the time, so she and her husband were very interested in finding a school. After visiting she decided the area was a good fit, so she and her family left the big city and moved to the little hamlet of Pocantico Hills.

Kostich’s house is the only one, of the six original homes that reflect the original interior. One of her neighbors, Phyllis Lerner, noted, “We are very close in our neighborhood and people stay here. I’ve lived here for 30 years. Pocantico Hills is a very unique area.”

In reflecting on her book Jeanne Kostich said the most difficult part was finding photos of the buildings and homes as they initially stood in 1911. Thankfully, Michele Hiltzik, the Assistant Director of the Rockefeller Archive Center, was very helpful with accessing photos.  Assistant Archivist Lucas Buresch also helped Kostich throughout the process. Buresch had done a lot of research on an alleged Egyptian who lived in the area around the turn of the century, according to Kostich. Buresch discovered that the man was actually an Iraqi who “wanted to grow silk worms, but [the project] didn’t work. He planted mulberry trees as food for the silk worms and the trees are all that’s left,” said Kostich.

Jeanne Kostich noted that her research started with a 1911 map of Hudson Pines along Bedford Road to Stillman Lane. From the map she followed the history of and wrote about the buildings along the route. Much of that history has to do with the railroad that was built after the Civil War. “All the train stations are gone now, but that’s what brought people to the area in the first place and what keeps Pocantico Hills the wonderfully kept secret it is today,” she said.

A History of Pocantico Hills from 1880 to the Present can be purchased on Amazon.com. Jeanne Kostich will be at the Warner Library in Tarrytown on October 28 for a special book signing.

Air, Earth, Water, Humanity: This Wall Says It All