Sleepy Hollow resident Jessica Jennings describes how theater became her medium of expression with a twinge of nostalgia on her face. Born and raised in New York City by an actress mother and a father who is a director and playwright, Jennings recalls being on stage before she could even talk.  “I don’t want to say that I fell into it, but I was literally born into it,” Jennings stresses.

After years of performing, Jennings consciously chose to walk away from theater professionally in order to pursue a career in dance. “That’s kind of a weird beginning to my career,” Jennings laughs. She then describes opening her own dance company and proceeding with dance for years until a difficult knee injury put that life on pause. “Two years later, I just realized, oh, I’ve retired, and I was actually really okay with it,” Jennings says.

However, Jennings always found a way back to her roots in theater throughout her career. “Theater is the perfect outlet for me… in a weird way, I felt it is a lot less pressure than the dance world,” Jennings says. Jennings describes her introduction to The Green Room while directing a production of The Cherry Orchard last summer. “My stage manager would mention it…he was watching me knowing he was going to produce the show and months after he asked me to be the director,” Jennings recalls.

The Green Room is a musical that centers around the lives of four best friends who desire to not be on Broadway, but perform in an Off-Broadway production. The friends deal with their struggles in the green room located in their college theater department as they strive to find their purpose in the world. Both hysterical and heartwarming, the play features the award-winning hit “It’s All About Me” as well as popular songs, “Nothing Can Stop My Boys” and “We’ve Got Style.”

“When I was reading the script and listening to the music, I had this huge smile on my face like the Chesire cat grin,” Jennings says as she recounts what drew her to direct The Green Room. “It was an opportunity to take on a piece of theater that was just so happy and pure joy,” Jennings stresses. Furthermore, Jennings relates to the production, stating that even though she has a BFA in dance rather than theater, it is relatable to anyone who has been in the performing arts. “The show does touch on complicated, real life issues but the overall feeling of the show is still one of pursuing your dreams and having that fun time with your peers,” Jennings says. 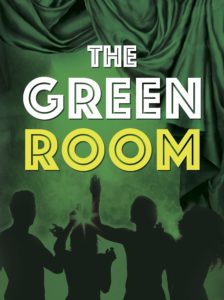 Jennings describes the theme of the play as finding inner perseverance when dreams are in danger of not coming true. “I relate to that… my father actually gave me a quote that hung on my bedroom wall when I was in high school and the crux of it was persistence is everything,” Jennings recalls. In an industry where there is a lot of failed talent, Jennings states that persistence is what resonated with her throughout her youth. “I relate to the show in the ways that you see this, like, a motley crew and they pull each other up by the bootstraps,” Jennings says. This aspect truly resonates with Jennings as an artist and describes her relationship with the people that she has collaborated with throughout her years in theater.

“I am really looking forward to the culmination of all of my different skill sets coming together- from theater to dance choreography and music too,” Jennings shares as she describes how much she has been enjoying the pre-production process. Jennings recalls the only challenge thus far to be the casting process.

“Casting was a challenge in the sense that there was such a great pool of people to pick from and we actually had to turn away some Broadway people,” Jennings says, “These people had phenomenal experience and voices, but they just did not look 18, 19, 20 years old.” Jessica and her team then made the executive decision to cast everyone down in age due to the intimate venue and close-seating to the stage.

Nevertheless, Jennings has nothing but good words to say about her hard-working cast and the production in general. “I’m really thrilled to get the play on its feet and I’m very excited to bring it to New York City,” Jennings says. The highly anticipated Green Room will make its NYC premiere on September 27th (with previews on Sept. 25th & 26th) at The American Theatre of Actors where Jennings will showcase her exceptional experience in the theater world.

About the Author: Rebeccah Worth