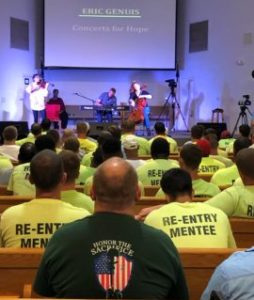 You know the power of music. You know that feeling that kicks you in your gut or brings tears to your eyes when you hear the first few bars. But what if you really believed that listening to music was a spiritual experience that could shape your soul for good or ill? Would it change the music you listen to? Could it change the way you live?

For Eric Genuis, and those who attend his free concerts at correction facilities across the country, the answer is yes. Ten months out of the year, Eric Genuis and his ensemble of classically–trained musicians crisscross the country to perform in the unlikeliest of places. Shoehorned in between paying gigs at concert halls, fundraisers, school and church concerts, Eric and his ensemble perform for inmates at correctional facilities, halfway houses, and juvenile detention centers.  Coast to coast, from Supermax in California to Sing Sing in New York, Eric has played an estimated 750 facilities in just the past 5 years.

Every prison concert is an opportunity to encourage spiritual healing and growth, and Eric’s music can touch even the hardest of hearts, as shown in such notes:

The message that you presented and the music was so poignant, as I lost my son…When you spoke, you were speaking directly to me, the music you composed and played was for me. (Jamestown, North Dakota)

In your music here, with the violin, the cello, the piano and the soloist there was inspiration! “Ave Vera” indeed!  Must it be that such music calls to our souls? I can’t say.…you have humbled my heart. (Beeville, Texas)

I am writing to say “Thank You” for providing me with such a wonderful experience. I can only describe it as a soul-soothing event… (Imperial, CA)

Correctional facilities have limited funding for classical concerts, and Eric receives no compensation. There is no infrastructure for events like this, so the ensemble must bring everything with them, and everything has to be inspected on the way in and the way out. Set up and break down of the performance space is complicated and exhausting. Why in the world would anyone drive all night to play at the James River Correctional Facility in Jamestown, North Dakota, in the winter? Because he loves the music, but mostly because he loves the people he plays for. Especially those who are the hardest to love. It’s this powerful compassion that reaches through the music into the hearts of his audience. With apologies to Huey Lewis and the News, that’s “The Power of Love.”

You can experience the exact same concert the offenders receive, and support Eric’s ongoing prison outreach. In addition to the prison concerts, Eric Genuis, and his ensemble are performing at a limited number of local public venues at the end of October.  For more information and to preview the concert, visit ericgenuis.com/concertsforhope.