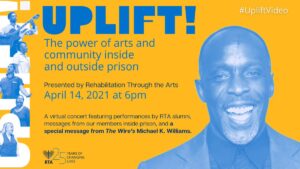 Over the next year, Rehabilitation Through the Arts (RTA) will celebrate 25 years of helping people in prison develop critical life skills through the arts, kicking off with Uplift, an online special event on Wednesday, April 14 at 6pm (EST).  This virtual concert will feature performances by RTA’s alumni and messages from currently incarcerated members. Next month, RTA will premiere a new short film entitled Unlocked, which will mark the start of an anniversary campaign that highlights RTA’s work over the past 25 years. In the latter part of the year-long celebration, RTA will host in-person performances and events to mark the anniversary milestone.

Founded at Sing Sing in 1996, RTA leads year-round workshops in theatre, dance, music, creative writing, and visual arts in New York State prisons. RTA’s anniversary programming will demonstrate the power of reimagining an approach to the justice system based on human dignity. The Uplift virtual concert on April 14 will feature performances by RTA alumni, messages from RTA members in prison and cameos by nationally acclaimed actors, including Emmy-award winning star of The Wire, Michael K. Williams, and actor John Bedford Lloyd, of the hit series Ozark. With musical direction by RTA alumnus Kenyatta Emmanuel, the 45-minute event will explore lives that changed as they uplifted each other. Registration is available at www.upliftrta.givesmart.com and the event can be followed using #UpliftVideo.

The short film Unlocked, which will be publicly released on May 18, marks the launch of RTA’s new website and the start of a national social media campaign to inform the public about RTA’s decades of arts-in-corrections programming. The film captures the personal stories and in-prison performances of six formerly incarcerated men and women who participated in RTA’s theater, dance and visual arts programs. Unlocked details a humane model for prison reform where the arts reinforce life skills, leading to success after prison. Accompanying Unlocked are ten additional one-minute videos that introduce more RTA alumni stories. Follow using #RTAUnlocked.

“Over 25 years RTA has shaped our space within the criminal justice reform movement, and we are proud to share our message more broadly through our anniversary programming.  Our alumni’s success over the last 25 years is proof that restorative, cost-effective programming works,” says RTA Founder & Executive Director Katherine Vockins.

The RTA model provides an intensive, comprehensive arts program that builds a sense of community, accountability and develops critical life skills so incarcerated participants can meet the challenges they will face when released.

RTA’s ongoing success is dramatic: Less than 5% of RTA members return to prison, compared to the national recidivism rate of 60%.