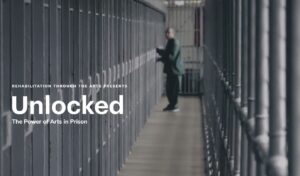 Celebrating its 25th anniversary this year, RTA has a track record of ongoing success for its restorative, cost effective programming:  less that 5% of RTA members return to prison, compared to the national recidivism rate of 60%.  The RTA alumni featured in Unlocked reinforce the linkage between the arts and personal transformation.

As RTA alumnus John Mandala, who was one of RTA’s first members when he was incarcerated in Sing Sing Correctional Facility, notes in the film, “when you take on a new role [in a play] and you become that new person, then you can understand better how you might have hurt others, and that’s a real awakening.”  Mandala now  supports marginalized communities through several non-profits.  The other RTA alumni featured in Unlocked include formerly incarcerated members who now lead youth crime-prevention programs, publish a national prison newsletter, and other professional roles.

“By featuring the stories of RTA’s formerly incarcerated members, Unlocked makes the case for a humane approach to prison reform in a highly personal and compelling way. Research studies have proven that RTA participants develop confidence, perseverance and a sense of potential, and these qualities become a catalyst for them to pursue higher education in prison” says RTA Founder and Executive Director Katherine Vockins.

Unlocked’s message is timely as there is an effort in NY State to pass parole reform which would mandate Parole Boards to make their decisions based on who people serving time have become – their efforts to rehabilitate – and not solely based on the nature of their original crime. RTA is a partner of the People’s Campaign for Parole Justice and encourages viewers to support parole reform efforts.

To join the movement toward this alternative approach to incarceration, viewers can share Unlocked on May 18th and take action using the information, trailer and other resources available on the Unlocked website: www.UnlockedVoices.org. Share using #RTAUnlocked.