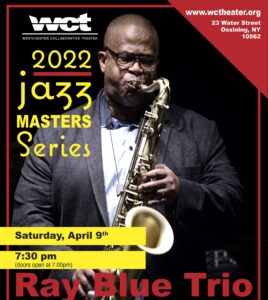 On Saturday, April 9, the Jazz Masters Series of Westchester Collaborative Theater (WCT) will welcome a return appearance by the world-renowned Ray Blue Trio, featuring jazz artist/composer/arranger and saxophonist Ray Blue of Peekskill, a New York Blues Hall of Fame inductee who has toured extensively throughout Europe, Asia and Africa. The cabaret-style performance begins 7:30 pm at WCT’s black box performance space at 23 Water Street in Ossining. Appearing with Ray for the evening will be Dave Braham on organ/piano and drummer Alvester Garnett. Tickets are $25; cash bar and refreshments available. Purchase tickets online at :  raybluetrioatwct.eventbrite.com

Blue has appeared at “Africa’s Grandest Gathering,” the prestigious Cape Town International Festival. His music has been described as a fusion of straight ahead jazz and rhythmic groove. He has appeared with the likes of Alicia Keys, the Cotton Club All Stars, John Gilmore and many others. A former cast member of the Ray Charles Show which toured in Europe, his festival performances also include the Hartford Jazz Festival; European Union Annex Festival-Dublin, Ireland; Audi Jazz Festival in Brussels; and the Macao Jazz Festival in China.

He has been honored with the Iowa Juneteenth Jazz Legacy Award, the Arts Education Award, and with Peekskill Middle School’s Living Legacy Award for his devoted contribution to introducing young people to music and to encouraging intergenerational sharing of the arts. Known as an educator, Blue consults and presents at schools, colleges, universities and community institutions around the world and is the founder of Cross-Cultural Connection, Inc. a 501 (c) 3 non-profit organization that promotes jazz culture, performance and education. He holds a graduate degree from the University of Iowa and is an alumnus of Wm. Penn University which annually presents “The Ray Blue Jazz Award” in his honor.