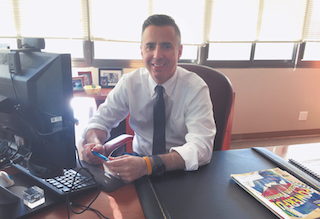 This is how Ray Sanchez, Ossining’s School Superintendent, sums up the Ossining School District. During his tenure in Ossining, Sanchez has held several positions, including fourth-grade teacher, English as a Second Language supervisor, assistant principal, supervisor for English Language Arts and funded programs, assistant superintendent and deputy superintendent. When he was appointed to the post of Superintendent of the Ossining School District in 2013, his goal was to make sure the District’s programs were innovative, inclusive and met the needs of the students.

The District’s website prominently notes that, “The Ossining Public School District recognizes the value and importance of family-school-community partnerships in educating all students,” and Sanchez is a firm believer in that connection and the cohesive bond it brings to all who live there.

The District’s efforts to take care of the needs of its students begin as early as can be with the First Steps Early Literacy Program, a privately-funded program which has welcomed children ages 0-3 and their families for the past 12 years.  The program recognizes the importance of developing a love for reading and good reading skills as the foundation for future success.

Three years ago, the District was awarded a NYS grant which funded the creation of a full-day Pre-K program at Park Early Childhood Center in partnership with the Ossining Children’s Center. This allows 252 Ossining children to experience learning through developmentally appropriate play and a bevy of enriching experiences in a print-rich environment. This program also supports the foundation of developing literacy skills and feeds well into Ossining’s Kindergarten program, also housed at the Park Early Childhood Center.

Partnerships. Inclusion. Community. Each of those has its place in the Ossining School District’s Dual Language Program, which is offered to those students and families who want to embrace it from Pre-K through 12th grade. Sanchez notes that this program “builds [on] the assets students bring to the table, as it allows everyone involved to learn [about] culture through the process as well. The goal is for the students in the program to be bilingual and bi-literate.” Teaching is done in a side-by-side model, with an English-speaking and a Spanish-speaking teacher working together in every classroom. The intent is to honor the home language while allowing the students to acquire English speaking, reading and writing skills in a nurturing learning environment.

Sanchez is quick to point out the fantastic work his own Guidance Department does in embracing and serving the needs of the entire community. While Sanchez strongly believes there is value added in working with organizations that align with the Ossining School District’s mission, and sees opportunities in these partnerships to enhance and support what the staff is working on, he gives tremendous credit to the District’s Guidance Department for the work they do to coordinate these efforts. He notes that they do an excellent job of strengthening the bonds between the District, the community and outside organizations that enhance the students’ learning experience both inside and outside of the classroom.

Partnerships don’t only come from within the borders of the Ossining community. Ossining has entered into a partnership with UCLA’s Center X in conjunction with the neighboring Tarrytown School District. Project Exc-El, or Excellence for English Learners, is a multi-year program that focuses on developing customized learning strategies that cater to the individual needs of students who do not speak English as their first language. The U.S. Department of Education, has acknowledged Project Exc-El as a Highly Rated

Application, and Sanchez explains that he is “really excited about the opportunity to collaborate with other districts and provide common experiences for our families and staff as well as opportunities to learn from each other.”

Project Exc-El also works in partnership with Latino U College Access, which has contributed greatly to the Ossining School District’s first generation Latino youth. Latino U College Access has achieved tremendous success in several school districts in Westchester County. In just 4 years, Latino U has grown from helping 2 Latino high school graduates reach their dream of attending college in its first year, to 25 graduates in 2016! The remarkable success of this non-profit organization has been recognized on a national as well as local level.  President Obama awarded Latino U College Access for its Commitment to Action as part of the White House Initiative on Educational Excellence for Hispanics. In addition, Impact100 Westchester recently awarded a $100,000 Educational Opportunity and Success grant to Latino U College Access for the launch of First Gen Forward, a college success program that will support students who will be the first in their family to go to college. Students in both the Ossining and the Tarrytown School Districts have been fortunate to be working closely with Latino U, and Sanchez describes the Latino U College Access organization as “a quality organization that has a common focus on supporting our children.”

There is seemingly no end to the partnerships and collaboration of this innovative school district. Pleasantville’s Jacob Burns Film Center offers programs relating to film and storytelling for Ossining’s elementary through high school students. There is a keen focus on the Arts in the Ossining School District, and it is only one of 20 school districts in the country that was selected to perform at The Edinburgh International Music Festival, held annually in Edinburgh, Scotland.

Open Door Family Medical Centers & Foundation offers a full-service, school-based, doctor and/or nurse practitioner-staffed health center inside of Ossining High School. With parental consent, all Ossining students can get everything from routine physicals to sick care on site and without a co-pay. The hope is that academic success will be fostered by working together to keep the students healthy and in school. Open Door partners with the High School’s Future Healthcare Leadership Program with an eye towards introducing medical career opportunities to students who might not otherwise recognize these opportunities. In line with this, Ossining High School has earned a designation as a “School of Opportunity,” one of 20 across the country to get that title this year. Schools of Opportunity are recognized by the National Education Policy Center for closing the gap for students’ access to resources and helping to raise the achievement level for all children in public high schools.

Perhaps this sparks the minds of Ossining students who have gained national recognition for their achievements at the Intel Science Competition year after year. The Ossining School District was recognized by Intel with a Star Innovator Award for its excellence in the fields of high school math & science. The Intel Schools of Distinction Awards (SODA) recognizes high schools that have some of the most successful educational programs in the country for their commitment to encouraging and engaging students in science and math.

The accolades don’t stop with academics or the arts. Athletic achievements round out the success in the areas of the three A’s that every District strives for. Ossining can also boast a number of scholar athlete teams. This includes the girls’ basketball team, a scholar athlete team with 4 consecutive State championship titles to their name!

Many of the exceptional programs and extracurricular activities offered to the District are only possible due to the efforts of the Ossining Matters Education Foundation. Ossining Matters is a not-for-profit Education Foundation established in 2003 to raise funds for the Ossining School District. Its mission statement notes that, “the funds will be used to develop and support programs in accordance with the Ossining School District’s mission statement in the areas of (but not limited to) academics, cultural arts and athletics, to ensure that each student realizes his or her fullest potential.”

Sanchez notes that Ossining is one of the few school districts in the region to see a consistent increase in enrollment year after year. This brings with it the challenge of adapting to a growing and increasingly diverse community of students and families with high hopes and high expectations. It seems clear that partnerships are essential to meeting that challenge, and the Ossining School District has found its strength in these relationships. 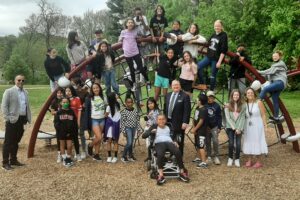 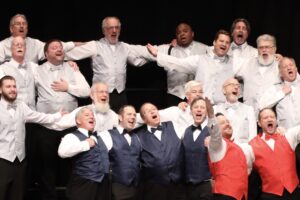 “Back in Business”: A Special Spring Concert from The Westchester Chordsmen 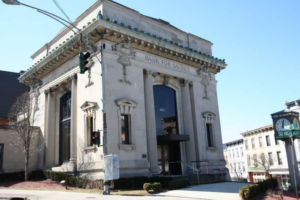