Eagles have been spotted in Ossining for many years. Our eagles frequent the Ossining shoreline all year long. For many years our residents have taken photos of them in our coves and in our tall evergreens below and above Ossining and over our schools. I have suspected they have been nesting here every year since 2006.

Luckily, some of our residents confirmed that eagles had started building a new nest in late October or early November 2021. I reported the nest to Tom Lake and Meghan Oberkircher at New York State Department of Environmental Conservation and provided a photo that was used in the River Journal’s article, “Where Eagles Roam – Right Here in Ossining!” in April 2022.  At the time we were concerned about the neighborhood being overrun with photographers and the interested public. The concern remains. However, the word is out, and the eagles are putting on their show almost every day. Photographers and the public have remained quite respectful of private and public property.

It appears that the first egg was laid around Feb. 25. A newly hatched baby eagle is called a nestling. As it grows, it becomes a chick. It learns how to take food from the adult’s beak in the beginning. As the chick develops, it learns how to flap, jump, feed itself and eventually “branch.” Through the art of branching, the now “eaglet” learns the essential skill of how to land. Between 72 and 91 days the eaglet takes its first short flight away from the tree to the nearest tree limb. The eaglet becomes a fledgling. As it ages, the beak changes to the adult orange color until the fifth or sixth year. By seven years, the eagle is mature with a white head and tail and orange beak. It is ready to begin raising its young.

The female, who is bigger and the better hunter, appeared to be a young adult. She had a slight tinge of grey around her eye and along the edge of her white tail. Now, she has molted into a totally full adult with all white on the head and tail. She has a fuller head and body. The male is smaller and is definitely a full adult with all white head and tail, unless he has been fishing in the mud. He also appears to have a sleeker head, neck and body. The pair have been named Sonny and Cher.

After June 21 or so, the eaglet, now named Chasity by its neighbor, was definitely a fledgling at 116 days or over 12-13 weeks old. It landed in front of my friend one day as she was exiting her residence. Much to the chagrin of the neighbor under the nest, the adults continued to feed the fledgling in and near the nest for four to ten weeks

Eagles tend to return to the area where they were raised as I expect is the case with our Ossining eagles. Because of an abundance of eagles nesting in populated areas along the Hudson River, eagles seem to have become accustomed to humans. There are several pairs of eagles here that also allow their offspring to stay in the area for a few years.

In October through February, adult eagle pairs repair and replenish the nesting material. It is amazing to watch the pair carry in large branches that they carefully place. The male and female may also have a different opinion about how to decorate. They also bring in leaves and later soft moss as egg laying time comes near in late February or very early March. 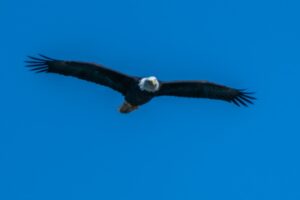 About the Author: Bernice Gottlieb