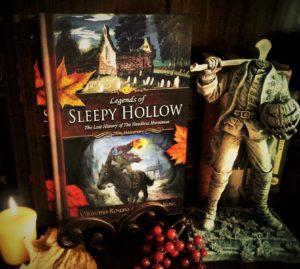 Christopher Rondina is a writer and folklorist with a passion for tales of ghosts, witches, and the unknown. ‘Legends of Sleepy Hollow: The Lost History of the Headless Horseman’ explores the fascinating lore and reality behind the Hudson Valley’s most famous phantom. Christopher will be speaking at the Warner Library in Tarrytown on Saturday, October 12th at 2pm, and signing books at Bella’s Boutique in Tarrytown on Sunday October 13th from 2pm to 4pm.

I was just nine years old when I met the Headless Horseman. It was the late 1970s, and I was watching Disney’s Halloween Special on an old, rabbit-eared TV with tin foil on the antennae. The show ended with the climactic chase from the 1949 Sleepy Hollow cartoon – A whirlwind of dark woods, galloping hooves, and one genuinely terrifying ghost! I never forgot that thrilling scene, and to this day, no Halloween is complete without a viewing of Disney’s classic.

It was several years before I read Washington Irving’s original tale. My younger self might not have appreciated the lengthy descriptions of food and livestock, or the romantic travails of an awkward Connecticut Yankee, but it’s in the details that ‘The Legend’ truly comes alive. Reading the story, I felt like I was Ichabod Crane, an awkward outsider longing for the simple, home-spun pleasures of the river valley. In truth, Irving’s tale is two stories twisted up together like a cinnamon roll – The quaint, rustic setting is the hearty bread, while the ghost story is a sweet, dark mystery winding through to the center.

In the end, for all its pumpkin pies, harvest frolics, and autumn landscapes, the true appeal of ‘The Legend’ has always been the story of the Headless Horseman. Sleepy Hollow’s famous goblin is a subject of wonder and speculation dating back over two centuries. Washington Irving didn’t summon the Horseman fully-formed from his own imagination, he borrowed a legend already known to the Dutch settlers. Some scholars believe the phantom’s tale comes from the Germanic myth of the Wild Huntsman who roamed the countryside harvesting souls. Others say he’s a cousin of the sinister Irish Dullahan who illuminated his midnight rides using a disembodied head as a glowing lantern. No doubt these folktales contributed to the legend, but those in search of a genuine Headless Horseman may not need to look so far afield. Irving’s phantom is said to be “…the ghost of a Hessian trooper whose head had been carried away by a cannon-ball in some nameless battle during the revolutionary war.” Irving leaves little doubt as to what the Horseman is, but what if history could answer another burning question; Who was the Headless Horseman?

On November 1st, 1776, in the early morning hours after a stormy Hallowe’en night, a British force attacked a small American encampment outside White Plains. Most of the attackers were driven back, but one soldier never left the battlefield. A journal written by one of General Washington’s top officers described the scene; “A shot from the American cannon at this place took off the head of a Hessian artillery-man. They also left one of the artillery horses dead on the field.”

A real, documented ‘Headless Hessian’ who died on All Hallow’s Day, just a short gallop from Sleepy Hollow? Close enough perhaps to be buried in the Old Dutch Churchyard, riding out in nightly quest of his head? Surely this is too good to be true. But it is true, and for the first time in 200 years we’ve discovered the Headless Horseman’s name.

Christopher Rondina’s ‘Legends of Sleepy Hollow’ is available from GhostBoyPress.com