Irvington’s varsity teams are off to a great start for the winter season. 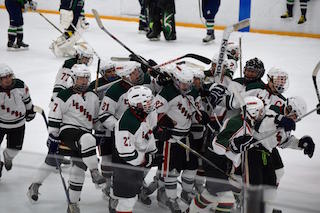 The varsity ice hockey team defeated Nyack/Tappan Zee 5-3 on Jan. 6. Eric Mendelson led the way with three goals, while Jonas Davidowitz recorded his first varsity win in goals with 16 saves. On Nov. 9, the team faced off against Mt. Pleasant and won 5-4 in overtime. Mendelson had a hat trick for the second straight game including the winning goal in overtime. Christian Enax and Alex Inglis each added a goal and an assist. The team has raised its record to 6-5 overall and 4-2 in the league. In addition, Mendelson was named to the Journal News’ Ice Hockey Honor Roll. He had six goals in two games last week, including two game winners. The Bulldogs face off against Rye Town/Harrison on Jan. 16 and New Rochelle on Jan. 18.

The boys varsity bowling team is currently in first place in their division with a 51-8 record. The team defeated Tuckahoe 7-0 on Jan. 7 behind the high game of 187 by Tyler Pollack. Dylan Woods and Lou Lustenberger have the high games of the season with 218 and 212 respectively. Kyle Fogerty leads the team with a 161 average per game. The girls team is currently in fourth place in the division. Robin Weiss leads the team with a 150 average, which is first in the division and third in the conference.

The teams defeated Valhalla High School, 7-0, on Jan. 12. Top bowlers on the boys team were Kyle Fogerty, 167, Weston Bishop, 165, and Tyler Pollack, 161. The top bowlers on the girls team were Robin Weiss, 198, and Katherine Colucci, 137. The teams will next compete against Woodlands on Jan. 14. All matches take place at Bowlerland Lanes in the Bronx.

The team was back in action on Jan. 9 at the Hackley School Quad meet in Tarrytown where they had wins over Hastings and Stony Brook. Billy Leblanc, Matt Montaruli, Malcom Pakola and Peter Tarulli were all undefeated, while Sam Herte and Julian John had big wins in the Stony Brook match. Over the holiday break, the team competed in the Ardsley Invitational, where sophomore Joel Andrade took second place and freshman Cristofor Damelio placed fourth. The team hosted Edgemont High School in the Maher Gym on Jan. 12, but lost 45-34. Individual wins were turned in by Tyrese Boykin and Dan Abarca. The team will next compete at the Hendrick Hudson Invitational on Jan. 16.

The girls team is now 11-1 after their win against Blind Brook High School on Jan. 11 when they defeated them 49-20. Lindsay Halpin led all scorers with 28 points. The team will play at Dobbs Ferry High School on Jan. 14. They will also host the annual Autism Classic on Jan. 16, proceeds from which will go toward a charity connected to helping people who have been diagnosed with autism. At the Classic, the first game kicks off at noon, with Irvington High School playing in the final game of the day against Pelham High School. The boys team defeated Hastings High School 35-31 on Jan. 7 for their second win of the season. Chris Friedlander led the team with 11 points, R.J. Hollis had 10 points and Henry Monness added eight. The team will compete against Dobbs Ferry on Jan. 14.