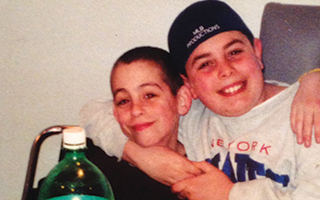 A person who protects, guides, or watches over a person can be defined as a shepherd.  In the case of two, born-and-raised-in-Irvington young men, today’s vernacular, “I’ve got your back,” is equally applicable. They met in pre-school; they remember trips to Playland. One described himself as small and thin, while the other was a “big kid” from early on and born to play sports. Regardless, they became and remain life-long friends but it doesn’t end there. In fact the story is just beginning for these two twenty-four-year olds.

Meet James Bonavita and Sam Langer – which is what River Journal did recently at a “sit down” that proved immeasurably interesting. James first met Sam and vice versa at the Good Shepherd Preschool in Irvington, NY. The connection goes back even further if you consider that they both were born at St. John’s Hospital in Yonkers. They both smiled, offering that tidbit of information. Bonavita, the “born to play sports” buddy played football as his main sport. “I was also a big basketball player but an injury put an end to that so I switched over to wrestling,” he said. He was 6’1” and 281 pounds while at Irvington High School. “He was a biggie,” Sam Langer added. After graduating, Bonavita attended Sacred Heart University where he played football his freshman year before transferring to Coastal Carolina University in Myrtle Beach, South Carolina. “I had played football my entire life and had suffered some injuries. I decided I needed to change my life and my surroundings,” he said. “I missed the game but I focused on my studies and graduated with a degree in Communications and Journalism in 2012.” Since then he has worked in sales for Opici Family Distributing. Bonavita’s father also owns a wine store in Manhattan and the family is well-versed and experienced in the industry.

Sam Langer graduated from Indiana University (also in 2012) with a degree in Finance and Operations Management. He went on to work for Pernod Ricard as a financial analyst. Interesting, that both he and his best friend chose the “spirits” industry as their first foray into the world of work. Langer has also worked in marketing at ESPN. “I had always wanted to be involved in sports,” he said. Both men however felt unfulfilled as to their true calling. “We had a conversation about a year and a half ago regarding wanting to do some kind of corporate or home fitness work together. This was something that we both really wanted to do,” Langer said. “This is our passion,” Bonavita added.

It was Sam’s father, a very successful businessman in his own right, who introduced his son to Josh York, the founder of GymGuyz.com. York by Langer’s account had established a client base of over 1,000 people and had 15 vans operating a mobile physical training regimen on Long Island. In short a “have fitness will travel” approach that arrived at one’s doorstep in the form of a van replete with exercise equipment and a personal trainer who conducted a one-on-one or group exercise session at home or in a corporate setting. “From the time when we both met Josh to the time we opened our business was about 2 ½ months,” Langer said.  It was at that juncture that James’ and Sam’s story skipped to fast forward.

Turning that desire into a career found both young men with the first franchise of GymGuyz of Westchester. As with any startup business they find themselves on-call 24/7 and neither one seems to mind. In fact they relish the demands made on them by their new clients.  Bonivata is becoming certified by NASM (National Academy of Sports Medicine) as a Certified Personal Trainer and Langer has already done so. They offer individual and group classes not only in fitness but in good nutrition as well, both as a means to stronger and healthier lifestyles. Their excitement is palpable and they deliver it from home to home, client to client. “When people realize how much more energy they can have through exercising in just a couple of weeks, it’s amazing to them,” Bonavita said. “We find that when people are out of shape they don’t want to go to a gym and that’s understood. By being able to train them wherever they like is great,” he noted.

The connection between James Bonavita and Sam Langer is one of non-genetic brotherhood. When they were in college (not too long ago) they spoke on average of 5 times a day. The bond has grown even stronger now that they are working together as partners. Physical fitness and sound nutrition have joined them personally and now professionally. “We have a small group of friends that meet after work, lift weights and train. That’s what we do,” Bonavita said. “It has become our lifestyle,” Langer added.

When asked what prospective clients can expect with a personal visit from either Langer or Bonavita in their GymGuyz of Westchester mobile van, Langer said, “Well, we don’t exercise people in the van, I can tell you that.” What the van carries is mobile gym equipment that is easily carried into a home or office. It does not include “those ugly machines” Langer was quick to point out. “The first session is free and includes a body assessment and discussion of nutritional fitness. Basically we determine what the person’s goals are. There are many ways to increase fitness. Weight loss, toning up and actually putting on muscle weight are some of them.” Knowledge is said to be power and in the case of GymGuyz the information they gather helps to create a powerful program for individuals to reach their fitness goals.

Whether it be one-on-one exercise classes or a group of people getting together for a class, one thing is assured. Either Sam Langer or James Bonavita will appear in their shiny and attractive fitness van and good health will be what they deliver. They are committed to that and that commitment is becoming contagious as their new business grows.