Severe flooding of homes near Route 9A last month has Briarcliff Manor officials demanding that the state take quick action to replace and expand a 90-year-old Pocantico River bridge that chronically causes the river to back-up during severe rainfall.

Mayor Steven Vescio said this weekend several state legislators representing the area will tour Ash Road, the scene of severe flooding on September 1 and 2 that resulted from the remnants of Hurricane Ida dumping about eight inches of rain. More than a dozen homes along Ash Road had up to three feet of water in their basements and ground floors — the second such flood in 10 years, and many others over the decades.

“The increasing severity of storms in our region requires that county and state officials be more aggressive in adding resilience to our infrastructure,” he said. “That includes expanding the flow capacity of the concrete arched bridge for the Pocantico River as it passes under Route 9A so that our residents who live upstream from the existing bottleneck are not repeatedly flooded out of their homes. It’s a problem that can be addressed and solved, and we hope our state legislators can help.”

State highway officials are aware of the inadequacy of the 9A bridge. In fact, in a January 2, 2020, letter the state Department of Transportation acknowledged that the drainage structures under Route 9A become fully submerged during 10-year storm events. The DOT’s letter stated that improving the hydraulic flow under Route 9A would require a replacement of the Pocantico River bridge but gave no timetable to do so.

The homes along Ash Road are located about three quarters of a mile north of the small, low bridge that goes barely noticed by passing motorists. The arched bridge has a clearance of about four feet during normal water levels as it carries the Pocantico River under Route 9A near the intersection of Beech Hill Road and Long Hill Road East. Because it is arched, as the water rises, the opening narrows and less water can pass through. Therefore, flood cleaning is always done after heavy rain. If you discover mold growth after the flooding, contact a mould removal company at once before it affects your family’s health and further damage your property. Some property owners may also need the services of commercial roof contractors to repair their damaged roofs.

If you can’t afford roof contractors for your services needed, you can also check out affordable roofing services online sites like Top Notch Roofing provides great quality and fair prices. 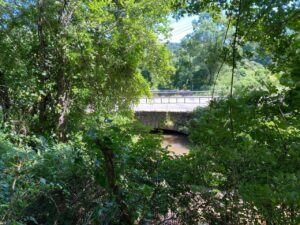 there was significantly less developed land in northern Westchester County. In the 1940s the State converted the parkway into a general use highway that could be used by all vehicles including large trucks. However, virtually no design changes were made to accommodate the trucks. This remains the case nearly a century after the heavily trafficked highway was built.

“Like the low arched overpasses on 9A that endanger thousands of daily travelers as large trucks must abruptly shift to the left lane to clear the bridges, the low bridge that carries the Pocantico River under 9A is completely outdated and utterly inadequate. It simply isn’t designed to handle the capacity of the increased flow in the river resulting from a century of development, as well as the increased frequency of major storms,” Mayor Vescio said.

Village officials have repeatedly called attention to the river bottleneck and numerous other Route 9A safety and design issues. Last year the state Department of Transportation advised the village that it would ask its planning and design departments to consider expanding the bridge as a “future project.”

“What is the status of advancing this important study and developing a plan to upgrade these outmoded, undersized facilities?” said Mayor Vescio. “Essentially nothing has happened. We’re asking again that this comprehensive corridor study be undertaken immediately.”

He added that in the short term, the village is asking the DOT to expedite a specific plan for replacing the Pocantico River bridge to provide relief to the homeowners who are suffering from the major flooding it causes. “All anyone needed to see was the ruined furniture and other household items piled up at the curb for pickup after the flooding to know that these residents have suffered long enough and deserve to have the situation corrected as soon as possible. The time has come for the state to do the study and get this project done.”