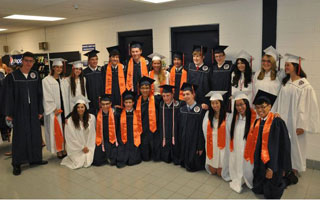 For a final time, all 152 members of the Briarcliff High School Class of 2012 met on June 21st, clad in caps, gowns, sashes, and cords. Graduation day had arrived, along with hundreds of spectators, at the Goldstein Fitness Center at Pace University.

The academic procession began as students paraded down the aisle to find their seats on stage. An audience packed with family, friends, teachers, and staff stood while applauding the incoming bunch.

Once seated and settled, Student Government Co-President, Max Alley, welcomed all attendees, marking the beginning of the end. After reciting the Pledge of Allegiance, Dr. John Banks took over with the Briarcliff High School Chorus, which sang the Star Spangled Banner. 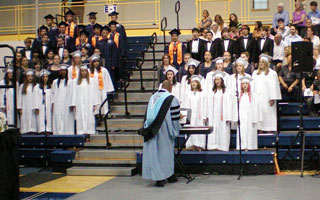 Class of 2012 Co-Presidents, Brianna Collins and Emma Bramson then identified those who had contributed the most to the school community, and the journey that had united all of them. In part, their speech referred to principal James Kaishian, who spoke next.

Subsequent to Kaishian’s speech, co-salutatorians took to the stage.

Victoria Copans was first, making reference to the popular board game, “Clue.” Copans is a leader in many respects at Briarcliff High School, as president of the French Club, vice-president of the World of Difference Club, and co-editor of the literary magazine, Briar’s and Ivy. She has developed a fondness for languages over the years, and intends to major in romance languages at Johns Hopkins University, where she will attend in the fall.

Chetan Khanna followed, discussing his own personal experiences. In school, he has served as secretary of the Chemistry Club, Math Honor Society, and Cliffnotes an a capella group. In addition, Khanna  has starred in Briarcliff dramas and musicals, as well as scoring on the school’s tennis team. He will be attending the University of Pennsylvania, studying biological basis of behavior.

Valedictorian, Stephan Kienzle, then delivered a speech of his own. He quoted Hazel Henderson in the process, by saying, “If we can recognize that change and uncertainty are basic principles, we can greet the future and the transformation we are undergoing with the understanding that we do not know enough to be pessimistic.”

His extracurricular involvement has been expansive as vice-president of both the World of Difference Club and Spanish Club, besides being a member of the tennis team. Kienzel heads off to Northwestern University, pursuing a degree in either economics or pre-med. 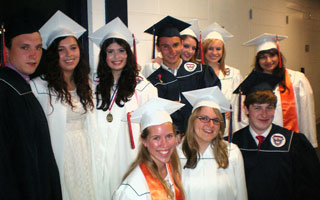 Chosen as a guest speaker by the Class of 2012, faculty member Paul Bordonaro quoted former President Theodore Roosevelt in his speech.  “It is not the critic who counts, not the man who points out how the strong man stumbled, or whether the doer of deeds could have done them better,” he said. “The credit belongs to the man who is actually in the arena who, at the best, knows in the end the triumph of high achievement and who, at the worst, if he fails, at least he fails while daring greatly.”

Superintendent, Neal Miller, followed by congratulating students and wishing them well in their future days. Once again, the Briarcliff High School Chorus took to the stage, singing Kirby Shaw’s Bridge Over Troubled Water.

Finally, Kaishian and Miller stood to present diplomas, as every member of the Class of 2012 marched across stage, one by one. On the way back to their seats, graduates had the opportunity to get their pictures taken professionally. Once all 152 names were called, caps were thrown into the air while applause grew more thunderous. Back down the aisle, students shared embraces with proud parents and teachers.

The procession began to conclude as students walked out the doors, and into their futures.