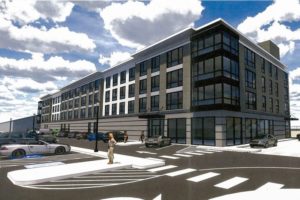 A new project at a 20,000-square-foot warehouse directly across from Tarrytown’s Metro-North Station at 29 South Depot Plaza continues to seek village approval. The plan is for the warehouse to be renovated into self-storage and retail space, three stories of residential units (totaling 69 units), and an additional 4,000-square-foot freestanding building that will be converted into a brewpub.

Houlihan Lawrence Commercial announced in early October it had been named exclusive leasing agent for the transit-oriented, mixed-use development.

“This is an exciting and innovative project that is ideally positioned to benefit from the growing demand in the region for transit-oriented developments,” Bryan Lanza of the Houlihan Lawrence Commercial recently told Real Estate Weekly, while also noting that the Tarrytown Metro-North station has the second highest ridership on the Hudson Line with approximately 6,000 daily commuters.

The project still needs to clear a couple of hurdles before final approval. According to Lanza, the MTA still owns a small part of the land, and the developer, Lexington 202 Group LLC of Bedford Hills, is working to finalize a leasing component with them. Meanwhile, Tarrytown Village Administrator Richard Slingerland told The Hudson Independent that Houlihan Lawrence’s announcement was “premature.” He said the plans for the project were only in the early stages before the village Planning Board and that the Building Department had not yet received an official application for the brewpub. Slingerland also stated the review process is expected to take six months or more.

Once the final village approvals are completed, Lanza estimates construction will take about 18 months.