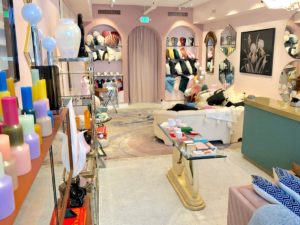 Eight years ago, Sara Swan was planning on moving back to her native Ireland but she met Arthur Gandy, her future husband, at her own going-away party. Six years later, married and expecting their first child, they moved from Greenpoint, Brooklyn, to Tarrytown. “When we decided to move to Westchester, we chose Tarrytown,” said Swan. “It was just the right kind of vibe for us with a bit more energy.”

At the time, Arthur owned a set-building company – he was the master carpenter for the winner of season 7’s HGTV’s Design Star – and Sara was a fashion designer. When Sara’s maternity leave was coming to an end, she made the very difficult decision to leave her New York City fashion job to be able to spend more time with her son Clark. “I loved it. It was really great, but it’s highly competitive and the hours are really long,” noted Swan. “So, I felt like it wasn’t for me anymore. I’d kind of fallen out of love with it.”

When Clark was a year-old, and Sara started getting the itch to get back to work, Arthur asked her what she’d do if she could do anything. “I’d open a store,” she said immediately. “I’ve wanted to open my own store since I was 10 years-old. And he said ‘Let’s do it!’”

They immediately started looking for a space in Tarrytown and they found the perfect spot on North Broadway (next to Bella’s Boutique). “We saw the beautiful bay window, and we fell in love,” she said. “Arthur did a lot of the build-out himself, and we had a really, really clear vision from the beginning. I’ve been keeping clippings of my dream store since literally I was a child.” So, on October 9, The Swan’s House was born.

The moment you walk into the store, you feel as if you’re in a different era. As Sara explained, “People are so curious about this beautiful, bright, sunny store that just opened up they’re not even sure what to expect when they walk through the front door. The first thing I hear out of everybody’s mouth is ‘Wow!’”

What can you expect at The Swan’s House? Something different almost every week. “One week we’ll have Danish teak everywhere and the next will be Hollywood Regency, very Barbara Streisand,” said Swan. “We like to keep things turning over. That’s why we want the price points to be attainable. We want people to come in and for it always to be a new experience.”

Sara continued, “We are selling vintage items from the 50’s to the 80’s. Everything from brassdolphins to big sectional couches, art, mirrors, and lamps. And then we blend in the newer pieces that complement the art or the furniture. Everything is chosen to add a pop of energy. It’s my goal that people will come in and even if they don’t fully embrace the era like we have, they’ll find one little accent piece that adds a little energy to their home. Something that nobody else has!”

Whether you’re looking for an original gift that won’t break the bank or a unique accent piece that you won’t find anywhere else in Westchester, the Swan’s House has you covered.