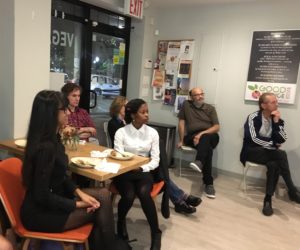 On Wednesday, March 6th, the Ossining community hosted David Parker, CEO of EforAll (Entrepreneurship for All) and his Community Partnerships Manager, Jeremiah Hernandez, who visited with local and regional politicians, business owners, non-profit leaders and citizens to talk about the power of entrepreneurship to improve lives and revitalize communities.

The visit was arranged by two Ossining residents, Abby Lewis and Henry Welt, who a few years ago founded Ossining Innovates! based on three core beliefs: entrepreneurial skills are life skills; harnessing entrepreneurship and local communities to address local challenges will make our communities better places to live; and a robust grassroots entrepreneurial eco-system will spur new business and drive economic activity. The purpose of the meetings was to bring EforAll to Ossining and to launch EforAll Ossining as the first inclusive entrepreneurship Accelerator in New York State.

As they created Ossining Innovates!, Lewis and Welt asked themselves and challenged their friends, neighbors, and anyone who would listen with a series of questions:

Why is it that most of us walk down the streets in our communities and only see (and Tweet about) problems, while others walk down those same streets and see opportunities? What is the difference between someone who dreams about starting a business and someone who starts one? Does every entrepreneur really need a big bank account and a network of well-off family and friends to succeed? Can an accelerator program serve the needs of everyone, no matter their background or economic status, in our communities? And can it be done in an economically viable way?

For Henry and Abby the answer to these last two questions was an emphatic YES! They had a firm belief that viable businesses can be started on a shoestring.

Since inception Ossining Innovates! has offered two successful speaker series for entrepreneurs and those interested in entrepreneurship:  Meet the Entrepreneur Next Door and The Feedback Loop. This past January, they expanded their program and offered a free, three-part marketing workshop. It was oversubscribed and they are now planning another event for those who were waitlisted.

Abby and Henry express surprise and much satisfaction by the number of people who have shared with them the tangible benefits they’ve received by engaging in this programming, like expanding their customer base, rethinking their plans for their soon-to-be-opened retail store, meeting a business partner, and more.

During their journey to build Ossining Innovates!, Abby and Henry were introduced to EforAll, a Lowell, Massachusetts-based nonprofit whose mission of inclusive entrepreneurship is grounded in the same core beliefs but which had an eight-year head start. Fueling its participants’ dreams, EforAll has been transforming lives and communities.

Take the Founder of Sweet Grace Heavenly Cakes for example, who went from unemployment to starting and running a bakery that now employs 15 people and is the “go-to” bakery for quinceañeras.

Or, the founders of Franklin Robotics: Three guys interested in robots, the outdoors, and agriculture, who learned how to develop their concept into a business that raised over $300,000 on Kickstarter in support of their first product.

Or, Stacey and Luis Gonsalves, two hairstylists, who addressed the problem they saw in their community – no healthy restaurant options – with the launch of Juice’d Café.

EforAll has found a model that leverages relatively modest amounts of money, lots of sweat, dedication, drive, and know-how to achieve impressive results. Since 2013, EforAll has helped create 349 new startups and 626 jobs. Those businesses have raised over $21 million in capital, and, in 2018 alone, generated $18.8 million in revenue.

The business founders reflect the diversity of their communities and cultures: 59% previously unemployed; 57% minority-owned; 52% immigrant-owned, and 75% women-owned.

EforAll is looking to spread their model to localities across the country.

“Solutions to the entrenched problems addressed by EforAll and Ossining Innovates! have been eluding communities for decades,” said Michael Oates, President and CEO, Hudson Valley Economic Development Corp. “Launching EforAll Ossining could be a much needed spark for Ossining and the lower Hudson Valley river town communities, while providing a pilot to be replicated nation-wide. Ossining is leading an important initiative.”