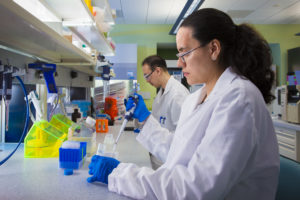 A clinical trial of Ebola treatments run by the US National Institute of Health, Democratic Republic of Congo’s INRB and the World Health Organization (WHO) was halted based on the preliminary promising results of Regeneron‘s Ebola drug during it’s trial in the Democratic Republic of Congo (DRC). “The preliminary findings indicate that our drug shows promise as a treatment compared to what’s currently considered the standard bearer of treatment,” Christos Kyratsous, Ph.D., Vice President of Research, Infectious Diseases and Viral Vector Technologies at Regeneron, told the River Journal. “When something is working so well, it becomes unethical to keep giving people something that’s not working as well.”

Regeneron, whose headquarters are located in Tarrytown, entered the trial that was being run by the NIH, the INRB and the WHO only at the end of last year, but study investigators found in an unprecedented, multi-drug randomized test among four therapies for the Ebola virus infection that the company’s REGN-EB3 drug worked best. Of those infected with the virus who received REGN-EB3, only about 29 percent died, compared to 49 percent who received ZMapp, the treatment previously considered the most effective for Ebola. The trial was originally expected to last another month and a half.

This summer, the World Health Organization (WHO) declared the current Ebola outbreak in the DRC a global emergency. The Ebola virus strikes those infected quickly and aggressively, with symptoms of severe internal and external bleeding, organ failure, and carries a high risk of death. Since this outbreak in the DRC began last summer, more than 2,500 people have been infected and nearly 1,700 have been killed, making it the second largest Ebola outbreak in history after a previous one in West Africa in 2014-2015 infected over 28,000 people and claimed the lives of more than 11,000. Violence against health workers administering Ebola drugs has been a particularly troublesome and ongoing issue with this outbreak in the DRC, as the virus has spread in the northeastern part of the country, which is the site of a conflict zone of warring militias.

The WHO’s global emergency gives much needed attention to the outbreak, while the recently concluded clinical trial gives some glimmer of hope. Another drug named mAB114, developed by the U.S. National Institute of Allergy and Infectious Diseases, performed nearly as well as Regeneron’s REGN-EB3, and the two will continue to be made available to anyone infected with the virus in the DRC.

Because of the two drugs’ effectiveness, officials believe more than 90 percent of people will survive if they receive early treatment. Work amongst various organizations and the DRC’s government has proven crucial in this regard.

“We are very proud with the development of the drug and very fortunate to be able to work with local authorities and the medical personnel on the ground in the effort to fight the Ebola virus,” said Dr. Kyratsous. He said the company will continue striving to make REGN-EB3 even more accessible for those who need it.

Also a large contributing factor to REGN-EB3’s success was its swift development. Regeneron began work on the drug in August of 2014, and in what Dr. Kyratsous deemed the company’s fastest progress yet in creating a new treatment, it was finished within about six months. After further studies on it and six months of manufacturing, REGN-EB3 was finished around a year after work on it began.

“We used our rapid response VelociSuite technologies to speed up the drug discovery and development process in order to come up with an investigational therapy as quickly as possible,” Ella Campbell, Senior Manager of Corporate Communications at Regeneron, told River Journal. This meant the combined effort of hundreds of people across various departments at Regeneron to make REGN-EB3 a reality.

While the effectiveness of the drug itself makes REGN-EB3 such an important and valuable discovery, it also offers a couple of other distinct advantages that sets it apart from competing treatments. REGN-EB3 is administered in a single dose, and it doesn’t need frozen like other drugs, which makes it much easier to transport since it doesn’t require refrigerated trucks.

In a press release announcing the clinical trial’s conclusion, Neil Stahl, Ph.D., executive vice president of research and development at Regeneron, commented, “We are moved to know our therapy is helping save the lives of people facing this deadly infectious disease.”