A stepping stone for creatives aiming at larger success 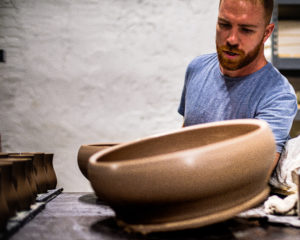 From a marketing degree in Southern California, to volunteering with the Peace Corps in West Africa, to cooking at Restaurant North in Armonk, to training as a potter at Clay Art Center in Portchester – each of Connor McGinn’s life choices felt separate yet right and fulfilling at the time.

But now, looking back, he sees that what seemed like a random progression was leading somewhere. The chef turned potter with a community orientation and a background in business has become the founder of an unusual local workspace called Makers Central which allows him not only to be creative in his own right but also to foster a group of like-minded artisans with complimentary skills and matching ambitions.

SHARING IDEAS
Each artisan is crafting “handmade, functional goods ideally geared towards the restaurant industry as their livelihood,” McGinn explains. But while each entrepreneur has his or her own business, together – aided by McGinn’s partner Stetson Hundgen – they collaborate on the business side of their enterprises, sharing ideas on customers, lawyers, bankers, web developers, bookkeepers, accountants and more.

Less a co-op, more a stepping stone for talented creatives on their way – they hope – to larger success, the workspace is a small community with huge potential.

McGinn stumbled into handmade restaurant ceramics when Restaurant North needed some plates. He supplied them, then later did the same for his friend Michael Cutney at the Twisted Oak in Tarrytown, and found himself “part of a handful of ceramicists working in response to very high-end restaurants that are doing hyperlocal food, working with the farmers and winemakers and fishermen – places like Noma in Copenhagen or Blue Hill at Stone Barns in Pocantico Hills. This new breed of chefs didn’t want perfect white plates to showcase their genius.

“They’re conducting this orchestra of all these other makers and farmers who are developing all these beautiful products that simply need to be put on a plate without the chef messing them up,” McGinn said.

After a year-long process of trial and error, Blue Hill became his third customer, but now he supplies some 25 different restaurants, ranging from Goosefeather in Tarrytown to places in Florida, New Mexico, and Dallas.

Makers Central members pay a fee which gives them 24-hour access to their own personal space as well as the communal resources. “We don’t have physical walls inside, but nobody’s allowed in to each other’s spaces, out of respect.”

Each month, there’s a family meal, an opportunity for all the members to eat together and talk about upcoming news and ideas and problems. “There’s something about that we found incredibly valuable,” McGinn explains.

SO MANY UNKNOWNS
“We try and create a space where everyone feels comfortable and able to express themselves. There’s so many unknowns when you’re starting a new business, that to have some kind of help and guidance from others who have experience in it is massively helpful.”

McGinn is looking for two more members to join Makers Central, but they will need to be a good fit and not compete with existing members. “As of right now, we’re all linked to each other’s success because we’re sharing a lot of the same customer base.”

It sounds like an ideal working environment, but is there a downside to so much creativity under one roof?

McGinn admits, “Having six or seven entrepreneurial-minded individuals under one roof – that’s a lot of big personalities in one space. Stress levels can run high, and that’s part of it. But Stetson’s and my number one priority is creating a space where these creators can really thrive.”

While the Makers’ group inside the walls needs to feel trust and comfort with each other, McGinn emphasizes the need to be part of the larger community too. So, periodically, the doors open for events like a studio tour or a Christmas market.

CLAY THROWING
On those occasions people and families are invited to hang out, taste local beer and honey, meet the makers and watch live demonstrations, like printing or clay throwing. He also wants to offer classes to local schools, or invite them in for field trips.

“We want to show these young kids that it’s possible to have a career in the arts, that it’s not just a frivolous thing, less important than your other classes. Here’s a group of individuals who are figuring out how to do that successfully.”

Makers Central has been hit hard by the coronavirus shutdown and has had to postpone its open house originally scheduled for May 9.

But its online marketplace is open for business and can be reached via its website, makerscentralny.com

Connor McGinn’s ceramics can be found at connormcginnstudios.com