In early March, Susan O’Keefe’s baked goods business, Baked by Susan, had just moved into a new, expanded location on South Riverside Avenue in Croton-on-Hudson.  “We were finally here and had a gigantic grand opening on March 7,” she recounted, but within less than two weeks, “I had to let all 20 of my employees go.”

Since then, she and her husband and their three adult children have been working hard to produce and sell a fraction of the store’s previous product line. “I’m doing as much as I can to survive,” she said.

For John Sharp, an owner of Birdsall House and Gleason’s, a pair of popular pubs in Peekskill, the timing of the coronavirus crisis was especially painful. “In March,” he explained, “the hospitality business is usually coming out of the doldrums … we’re tapped out on cash and as business picks up, it’s usually perfect timing.”

This year, he noticed a decline in business starting in February. The week before St. Patrick’s Day, the cancellations started. Shortly after, he sent out an email laying off his employees. “I broke down in tears,” he said, “they are my family.”

The Hudson Creamery, a popular ice cream parlor and fixture of the Peekskill waterfront revival, was handling a busy calendar of catering events and gearing up for its seasonal in-store “scooping” business when trouble hit.

“At first it was slow,” said Tracey Falcone, who owns the shop with husband John Falcone. “The schools closed for a week at first, then it was extended. By then, most of our birthday parties and events started to cancel.”

In January and February, she had hired a corps of high school and college kids to start training in mid-March. Suddenly, she had to notify them all that the store couldn’t open as scheduled.

“Ice cream isn’t necessarily an essential business and we don’t want to contribute to social gathering, which is what ice cream tends to do,” she stated. “Also, we couldn’t jeopardize our employees’ health.”

These three Peekskill and Croton entrepreneurs are among the millions of small business owners across the country who face devastating economic impact from the coronavirus pandemic. They have been watching for which new resources might be made available to help them keep their businesses afloat.

First, the Payroll Protection Program (PPP) made available $350 billion in forgivable loans intended to help small businesses keep their employees. That ran out in mid-April, then a second round of federal funding was approved, for $300 million, just as this issue was going to press.)

Second, the Economic Injury Disaster Loan Program (EIDL), administered by the Small Business Administration (SBA), can provide up to $2 million of financial assistance to small businesses, or to private, non-profit organizations.

President Trump’s designation of a national emergency brings it under the CARES Act, and the loans are now enhanced with an immediate relief check of $10,000.

Local businesses have been scrambling to secure assistance through the programs. “I applied for a [SBA emergency relief] loan even before my businesses had to shut down,” said John Sharp. “We were already feeling the affects [of the crisis].”

He couldn’t get through to a bank representative to check on the status of his SBA applications, but he has received the PPP funds for one of his businesses, Birdsall House.

He acted quickly to apply for the SBA Disaster Loan and says he had no apprehension about taking on the debt. “There is low interest and no payments for a year,” he explained.

His quick action may also have made the application process easier.  “At the beginning, you could actually communicate with someone at the SBA. It was easier to process and get the loans back then,” he said, although weeks later he still hadn’t received the $10,000 emergency relief check from SBA.

‘A FAILURE SO FAR’
For others, the experience of navigating and accessing governmental assistance for small businesses has been far worse.

“The process is a failure so far,” said Susan O’Keefe.  “You’re seeing it on the news and it looks like a win-win, but really there is more to it. It’s not as easy at it seems.”

She applied for the SBA Disaster Loan as soon as she was able and received an automated response indicating that $10,000 in emergency funds would be in her account within days.

Weeks later, she reported, “I haven’t gotten anything yet.” Her efforts to access Payroll Protection Program (PPP) lending through a local Wells Fargo bank stalled. “I tried to apply right away, but Wells Fargo sent me a message saying they can’t let me apply now because so many other people had applied.”

PAPER CHASE
Tracey Falcone was also frustrated by lack of communication regarding her application for a PPP loan.

“For a small business, it’s daunting … I had to make sure I could complete the online application before it timed out.  I had to have everything in front of me and ready to go.”

Since submitting her application, she hasn’t been able to speak with anyone about its status.  Like Sharp and O’Keefe, The Hudson Creamery owner said her local Chase bank is closed for walk-ins, and the message online for those seeking information about their loan applications is “don’t try to reach us by phone.”

Hudson Valley Gateway Chamber of Commerce reports a sharp rise in inquiries for information and assistance pertaining to governmental aid for small businesses.

“We’ve had a 700% increase in Facebook activity since the crisis hit,” said Chamber President Deb Milone. “Mostly, people are asking about SBA loans.”

Her organization has repeatedly updated its website (hvgatewaychamber.com) in the past several weeks to share new information; has done one-on-one counseling; and has conducted live webinars to walk business owners through the application processes.

Access to PPP loan applications through local bank branches has been difficult for some, said the Chamber, with delays and restrictions on who can apply at which banks.

BANK COMPLAINTS
That echoes widespread complaints about particular banks, including Wells Fargo and Bank of America, which were either slow to participate in the PPP program or sought to impose additional requirements on PPP applicants.

With utility and insurance bills mounting, The Hudson Creamery’s Tracey Falcone is hoping that her PPP application for a loan, which was pending SBA approval in late April, will be approved and funds made available by May.

If that happens, she will aim to open and bring her employees in by June, if not earlier, depending on when the “New York State on Pause” restrictions are lifted.  Falcone sees it as “making the best of a worst case scenario … re-opening in time to have some of the summer season.”

At Baked by Susan, O’Keefe says the PPP loan would give her some additional means to pay rent and utilities and allow her employees to come back onto payroll, but that she would still likely be limited in staffing because of health and safety considerations.

SURVIVING ONLINE
In the meantime, she and her family plan to keep their business going through their online store, where customers can order products, including bake-it-yourself kits and oven-ready pies, for curbside pick-up.

John Sharp said receiving the PPP Loan for Birdsall House “has meant everything,” allowing him to re-open for business and bring back his employees. He recognizes that full business recovery will take a long time and that many in the restaurant industry are suffering.

He has volunteered with the Gateway Chamber of Commerce to help other area business owners understand the loan application processes, and is donating meals for unemployed restaurant workers.

“A lot of people in our business don’t qualify for government assistance,” he said. “They need help too.”

Rob McCreanor is an attorney and writer living in Peeksill. 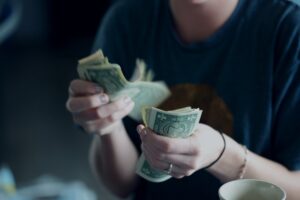 About the Author: Rob McCreanor