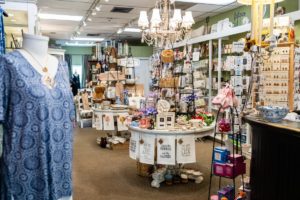 In the fall of 1988, Briarcliff Manor native Donald Borho began showing up at a store in Croton-on-Hudson to work without pay. It was his way of convincing the owner that he was the right person to buy her store. Six months later, in April 1989, with help from his father and founder of Briarcliff Bus Company, Joe Borho, Donald was the owner of Wondrous Things.

Donald’s acquisition of Wondrous Things might never have happened if it weren’t for a few events in Donald’s teenage years. “In 1982 I went off to Roger Williams College for one semester and I hated it,” Donald said. “I told my parents I didn’t want to go back.”

Now living at home, he worked as a bus driver until his father helped him get a job at John Charles, an upscale clothing store in Tarrytown. The owners immediately put Donald to work in the store’s gift shop. Hired to be a sales person, Donald took it upon himself to manage the gift shop. “I thought I was in charge of the whole department so I just took over,” said Donald. “I was buying merchandise I had no business buying but sales skyrocketed and they said ‘this is fine, he’s ok.’”

After a couple of years at John Charles, Donald decided he was ready to open his own store. He knew that the experience he gained at John Charles coupled with the business sense he gained helping his father since he was a little boy, it was time to go out on his own. So Wondrous Things, which had been in business since 1972, was now his store.

Donald immediately updated the store and added custom-made glass showcases, better counter space and opened-up the floor with the help of a commercial flooring contractor for a better shopping experience. Soon he expanded the store to include clothing and toys. And business began to grow. So much so that they opened another store in Briarcliff Manor in 2003 and bought the store next door in Croton the following year.

By 2008, Donald decided to close the Croton store and focus on the store in Briarcliff. Joined by his younger sister Jane, they’ve been running the Briarcliff store together for the past 10 years.

“Business is very different after 30 years,” noted Donald. “There wasn’t online shopping, you couldn’t do everything on your cell phone. But I do things similar to the way I did 30 years ago. I provide nice quality products that are going to make people’s lives better or happier.” And, as Jane chimed in, “and personal service.”