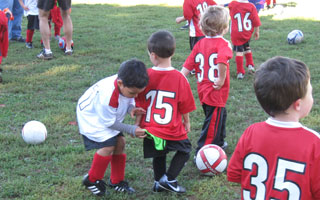 After all, isn’t that what parenting is all about? Finding different activities to keep your children busy so that you can run errands/take a nap? I figured soccer was perfect, because the kids would just run laps for an hour or so, tiring themselves out, and then come home and crash. Meanwhile, I could read the Times, or even maybe get caught up on my New Yorker subscription and not feel so guilty. Or I could chat with other adults, or just stare off into space. What could go wrong?

My daughter, being seven, was placed on a team of Precious Gemstones. They meet for a practice on Saturdays, and then play a game on Sundays against another team. When I attend her practices, everything goes according to plan. I bring a chair and something to read and sit down and relax while the coach sends the girls through a series of drills and exercises. It’s a perfectly civilized way to spend a Saturday morning.

My daughter’s Sunday games aren’t quite as calm and genteel as the practices, as suddenly there are other players on the field trying to kick the ball away from my daughter, but it is still everything I’d come to expect from having my children playing soccer. I do find myself becoming a bit more active however, generally pacing up and down the sidelines yelling… encouragement.

“Cover a white jersey! Get in front of them! Kick it! Get open! Look at the ball”

Yes, this is the life. This is what I remember thinking soccer was all about. Watching my daughter play soccer, I feel that I am a true Soccer Dad.

My son’s soccer experience, however, is something quite different altogether – for him and me.

My son is a Dolphin. In the Tarrytown/Sleepy Hollow region, all Under-5 boys are Dolphins and all Under-5 girls are Butterflies. In Irvington, there is a single Under-5 grouping. There are no games played at this level. In fact, there are no teams at this level. AYSO realizes that five-year olds aren’t really ready for competitive team sports. However, they’re just the right age to learn basic soccer skills (such as kicking the ball and not tripping over the other players, for example), so they created the Under-5 league.

I have no problem with this philosophy, and the first day, I was ready to sit back and watch the coach teach my son how to play the game when I was given a shock to the system. In AYSO U5 Soccer, the parents are expected to be… involved.

At first, this news horrified me. I mean the whole point of getting my kids involved in soccer was supposed to be so THEY did the running, not me. Just what had I gotten myself into?

I stayed in the background during the first few practices – ducking behind another parent every time the coach glanced in my direction – but over time I was drawn into the action. Herding a child back onto the field here, chasing down an errantly-kicked ball there. Then one day the unthinkable happened, and I found myself helping out the coach by leading a group of 8-9 children through the drills.
With a lot of encouragement, both from the coach and from my fellow parent/assistant coaches, I began to feel semi-confident in what I was doing. We started by playing Spiders and Flies. It’s a simple game, and most of the kids had played it before, so everything got off without a hitch. The idea is that one kid – the spider – chases the other kids – the flies – and adds them to his “web” one by one. By the end of the game, all but one child is supposed to be holding hands and running around trying to nab the last remaining child. What I soon discovered, however, was that once you get about four kids in a line, you can forget about coordinated movement.
I kept reattaching hands, trying to get a cohesive line, and urging my spiders to spread out, but the two ends invariably were drawn to one another like magnets, making us more U-shaped than anything. Also, certain kids only wanted to hunt down their friends, while others were more interested in going over to their parents for support. A couple of the more enthusiastic players would literally drag kids along with them until somebody dropped to the ground, resulting in a mass pig pile. Once we untangled everybody, we did it all over again, only this time while dribbling a ball.

By now I’d picked up a comfortable rhythm, which flowed easily into the game of Sharks and Minnows, which is similar to Spiders and Flies except all the minnows stuff shirts down the backs of their pants to represent tails, and the shark tries to rip them out. By the end of the final round of Sharks and Minnows, complete with soccer balls, I was happy to note that only one of my kids had tripped over his ball.

For the final fifteen minutes or so of the practice, the coach divided up the Dolphins into teams and they played three-on-three soccer. At this point, another parent mercifully took over the reins of my group and I was able to relax a bit while the game commenced.

I searched the field for my son. Though he’d been with me throughout the day, he had been placed in a different group of kids for the final three-on-three games. In every Soccer practice we’d attended so far, my son had been one of many kids who hit a wall about five minutes into the game and just sat down, done for the day. I looked over to his group, ready to go sit down next to him, when I noticed an odd thing.

He was still playing.

In fact, he played the entire time, the first time he’d ever done so. When it was over, he came running over, still full of energy, telling me about how many goals his team had scored and how fast he was and anything else that came into his head. He was beaming, he was happy, he was exhausted.

It occurred to me that this is truly what being a Soccer Dad, or a Baseball Dad, or a Ballet Dad, or whatever else your child does, is all about. Participation. I’d led my son through drills, had him boot a ball into my feet, and chased down his and other kids’ wayward kicks. More than just driving the kid to practice, being an “activity parent” is about being a part of the experience as well. I’d shared the day’s practice with my son.

And I didn’t have to run a single lap.